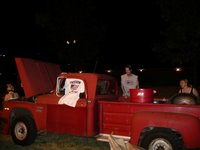 It was just another Thursday night in Wilmington, until the crew from Dogfish Head showed up and issued a bocce challenge to the Iron Hill Wilmington crew. The DFH team came in costume (wigs included) and lived up to their usually off-centered, good natured selves. The team brought along their truck and made an entrance by parking it on the lawn behind the building. Unfortunately, the Chateau Jiahu did not make it along for the ride as anticipated and the 120 minute had to pinch hit. 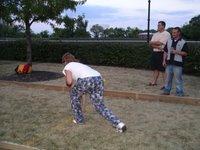 Who knew that when Kathleen and I arrived one hour into the gig that the only DFH brew remaining would be the Punkin Ale? That's fine, because we were looking forward to the Punkin, but also as much so as the Jiahu and the Red & White. Oh well, so it was off to the Punkin and then on to the Berlinerweisse from Iron Hill (both with and without the woodruff). But, equally unfortunate, was the early exit of The Cannibal which I had earlier this year at the West Chester location but was looking forward to trying again. Sheesh, guess that will teach us to be prompt when these things begin! 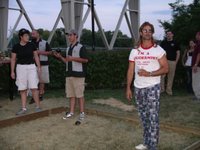 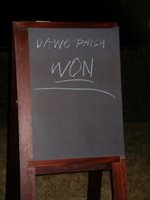 Well, in any case, the beer was still tasty (we also had Pig Iron Porter and Finndeman's Framboise, both from Iron Hill) and the entertainment was top notch. Picture Sam, Matt, Mike, and the rest of the crew from DFH dressed in their costumes (did someone say off-centered again?!) engaged in a riveting match of bocce. The Iron Hill team was no match for the visiting DFH team. I didn't get a chance to snap a picture of the final score, but it was something close to a landslide win for DFH. Here's a shot of the message posted later. 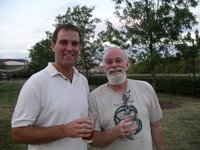 Another pleasant note to the evening was conversing with Mark Haynie and Gary Monterosso, both stellar beer writers from New Jersey. Great weather, beer, people, and games along the waterfront. Another fun event from two great breweries. What more could we ask for?
Click Here For All Beer Event Reviews
Written by Bryan Kolesar at Friday, August 18, 2006

Hmmm...maybe we should start a Brew Lounge Bocce Team!!!

While I'm learning I could help with the beer part of Beer and Bocce.

Thank's Kathleen, Bryan and Patty for representin' and reportin'.