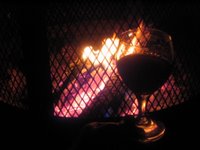 Ok...I'm the last one at the fire. Bryan and Scott just left. I'm a Friday night kinda guy so I'll be up for a bit more. I thought a little recap of the night might be in order. "Why?", you may ask. "Beer is about people getting together." That is just what we did tonight. Just opened one of my barleywine homebrews from last year. So let me tell you about tonight... Home from work on a Friday, a beautiful Friday at that. Took a short nap in the sunroom. Woke up and walked ouside to get the fire going for dinner. My son and oldest daughter helped me with the kindling Wow, I can't believe the air is so cool on an August night. It's gonna be a great night. Lisa brought out the hotdogs, ribs, kielbasa and salad. I grabbed my last Alpha King and poured it. The fire was started in short order and we were on our way sharing our dinner with Bryan and Patty. Before I knew it Bryan brought up some St. Bernardus Abt 12 (60th Anniversary "Special Edition") to taste. This was our first taste and I was anxious to see if our buy was worth it. Pass the ribs...give me some kielbasa...I think I'll grab my last Rochefort 10. Well these two beers really complimented our meal. The wood fire really added to the meats and the malty beer brought everything home. Not too spicey...not too overpowering...just savory-sweet-salty. The ribs probably stood out as the better food to pair either of these belgians with. :-) One thing led to another and the belgians were gone :-(, but, I was buoyant and ready for the Friday night before us. After a while I disappeared and reappeared from the cellar with the next to last bottle of North Coast Old Stock Ale from 2004. Mmmm...one of our favorites. Not quite as refined as the Belgians, but delicious in its own rite with some more bitterness and a huge malt backbone. Soon Scott was making his way over to the fire from a few houses over. By the way I really need to set something straight here. Ummm...how do I put this. Scott has been getting diss'd a bit on the site lately. I just don't know how that could happen. Do you? You know...saying that I would serve beer from a stale growler to him. Well I'm hear to say that Scott is no longer the macro swilling guy next door. He has officially embraced the "other" beers in the world. Amazing what an Ommegang festival can do for you...eh? ;-) We perservered through the night by tasting Wisconson's Capitol Brewery Blonde Doppelbock and Incubus from the Sly Fox in Phoenixville, PA. Lots of laughter to go around on this freakishly cool night in August. I can't wait for Autumn! Now the embers are fading with the barleywine and the music too. The crickets, tree frogs, and the buzz of the highway are starting to drown out the music. I think it's time for me to pack up the laptop and hit the sack. Goodnight :-)
Written by Adam at Friday, August 11, 2006

IT WAS AN AWESOME NIGHT (worth shouting! :)

Great beers with the great weather and the great neighbors.

Scott's out of the doghouse, heheh!

Check out a couple of additional pictures, over here