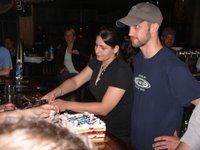 John Rehm is leaving the Main Line John Harvard's Brew House in Wayne, PA. John is a big reason that the Main Line JHBH improved in huge way over the past couple of years (in California-speak, it no longer sucks). His crowning achievement was the Gold Medal for his Altbier at the GABF in 2005. Along the way, he's served up a wide variety of high quality, tasty brews from his Maibock, to the Wheat Wine, and Bourbon Sue...just to name a few. John will be joining the team over at Yards in Philadelphia, beginning September 18th. (In his place at JHBH will be a former assistant brewer at the Monroeville, PA location of JHBH; so, they're keeping it in the family. That should bring good things, we might think.) John says he's looking forward to the hectic schedule of production brewing every day and the bottling aspect, too. It sounds like there's no doubt that he enjoyed his time in Wayne, but is probably looking forward to a shorter commute across town from where he lives in Philly to Yards. 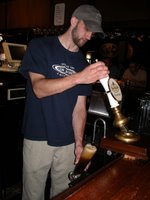 Back to last night...He was serving up his last releases of Wheat Wine, Bourbon Sue (both CO-2 and cask), Barleywine, and Scotch Ale. Let's see, for a quick breakdown: ~Black Eagle Scotch Ale (Holy Smoke!! seriously, Holy Peat Smoke...we'd say it again, but you get the point; simply awesome) ~Old Eagle Wheat Wine (50/50 barley and wheat; so, so extremely good with a smooth mouthfeel and full of fruit and wheat flavors.) ~Bourbon Sue (the CO-2 version, great! the cask version? stratospheric; John please don't leave!!) ~Skull Splitter Barleywine (just a sample before we hit the road, oh how we wish we could have stayed for more; such a nice smooth, rich, bourbon-warming barleywine...too many adjectives for this space!) In addition to all of these wonderful concoctions, also on tap were All American Lager; John Harvard's Pale Ale; American Stout; Double Wheat Ale; Keller Kolsch; Dortmunder Amber; and the aforementioned Altbier. And, bottles currently available to take home include Belgian Tripel Threat and King Hop Kick Double IPA. John, thanks for being real...really good! Good luck at Yards. Thanks for the advice on the Wheat Wine recipe; Adam's going to try to make a batch in the next month or so.
Click Here For All Beer Event Reviews
Written by Adam at Friday, September 15, 2006

Thanks fella's for all of your support. I had a hell of a time tapping all those good brews on Thursday night - and I think everybody else did too! What a great way to celebrate a good two year run with Harvard's. PS - most of those special brews may survive the weekend - all except the Bourbon SUE :( - Keep up the good work and thanks again. -John

Our pleasure! We'll be cracking open that growler tonight :-)