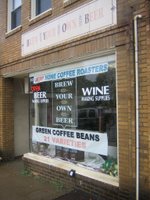 Well I finally did it. Jeremy told me about Brew Your Own Beer in Havertown PA almost a year ago, but, I just never made it there. I can't believe I waited this long. 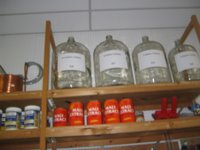 My son and I took a drive down to Havertown last Saturday afternoon. It was a perfect day for beer stuff. Ernesto was raining down on the East coast and the whole three day weekend was ahead. When we walked in we were greeted cordially by John Reynolds the owner. We talked about a bunch of topics including brewing beer, making wine and roasting your own coffee beens. There's no doubt John can get you going in the right direction. Today I was looking for ingredients for an Oktoberfest/Marzen style beer. If you know me, you know I have a hard time making up my mind about things. Today was no different. I didn't have a recipe in mind and I was spending too much time researching so I just asked John if he would help me with a recipe. He was more than happy to help. In a few minutes we decided on 7 lbs of malt, bittering hops, finishing hops and two types of yeast. (see this post) I decided that I'm going to split this batch. One half will be fermented with a typical Ale yeast and the other will be with a White Labs lager yeast. That reminds me I purchased a Johnson Controls Refrigerator Thermostat as metioned in a June, 2001 RealBeer article. This is allowing me to use my spare fridge to lager half of my Oktoberfest at 45 degrees. Seems like John has lots of gadgets like that around. When I left I had all my ingredients, the controller and a case of bottles for Gabe. All in all I really enjoyed myself. It isn't exactly close, but, I'd be willing to make the trip now that I know what a great place it is! :-)

John, I'll bring a homebrewed barleywine to share next time. Here are some more pictures my son took while he was waiting for me. The little guy needed something to do while Dad was shooting the breeze with the beer guy ;-) 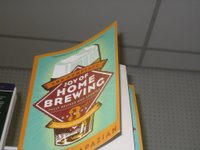 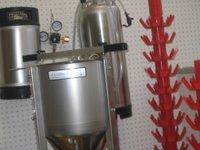 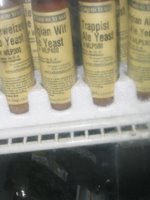 hi john .i will be in soon john oswald from usair...its been a long time.

I went in there for the first time this past weekend and all I can say is "wow". As a beginner, John was very patient and explained what I needed to get started. And his motto of brewing your first batch prior to reading all of the books makes perfect sense. The process won't really change - only the ingredients. Thumbs up for a great place.

Great place. Its great to support a local merchant and make some great beer too. He was a huge help and truly willing to help out.