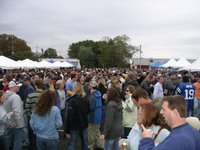 Let's just say I was in a bit of a daze even before the Kennett Brewfest started. My disclaimer for my spotty coverage (both written and pictorial) of this event is that I finished running 21 miles just a couple of hours prior to the festival. See, this marathon training "stuff" is really causing a conflict here ;-) In any case, we showed up around 2:30pm and were fortunate to buy tickets at the gate. Not a long wait at all to buy tickets, then less than 5 minutes later we were queuing up for our first tasting. Scratch that, my first tasting was going to be The Shed from Vermont. How excited was I when their banner was one of the first I saw after passing through the gate? I asked the man behind the table if he was just setting up. He said that he was packing up because they kicked what they brought. He pointed to two empty sixtels. Now, I gotta say, this is one extremely popular event and there's not much to point at for improvement here...but, come on, two sixtels for the Kennett Brewfest? I know, too, The Shed is popular but why only two sixtels? I first tasted their beer at Ommegang's festival this summer and had no idea the next time I may come across some. So, you can see my disappointment. Moving along.... I think I'll turn the rest of this event review into a bulleted format. Based on my commentary, it's probably easier (for me to write and you to read!) - Top 5 most memorable beers (never before tasted): Stewart's Smoked Porter; Erie Fallen Bock; Stone 10th Anniversary; Weyerbacher Double Simcoe - Most memorable t-shirt (worn by a female) : "Say Hello To My Little Friends" - Biggest Disappointment(t): The Shed runs out of beer 1/2 hour into general festival (guess I'm going Connoisseur next year!) - Biggest Disappointment(t): 25 minute wait for porta-john - Most Curious Head-scratcher : A cigar vendor? I like a good cigar from time-to-time as much as the next person, but... - Why, oh why, could I not find?: Twin Lakes; Anchor; Flying Dog (man, I must've been in a daze or they just weren't there...I understand that 7 cancelled) - Why, oh why, could their line never seem to shorten?: Ommegang (3 Philosophers); McKenzie (Dude sure draws a crowd) - KSBF-inspired brew by DFH : "Shut Down, Go Away, and Don't Ever Come Back...or Else Ale"; State Troopers were quick to swoop in and ensure that not one more bottle, keg, etc. was cracked open, under threat that they never be invited back to Kennett Square - C'est la vie : A parking lot may not be the most aesthetically pleasing location for a brewfest, but compared to the cramped quarters of downtown streets, according to most this was a good move
Click Here For All Beer Event Reviews
Written by Bryan Kolesar at Tuesday, October 10, 2006

You never know when a brewfest is gonna get outta hand! Those hop heads and malt maniacs don't know when to stop. Sure glad the police had it under control. Umm...yeah...right.

Has anybody ever been to a brewfest that got outta hand?

I had a great time. I really liked Boulder's Hazed & Infused, Ommegange's Witte, and Erie's Fallenboch.

So is Mike from Dogfish Head getting us into Stout's or what?

I must have missed the Dogfish reference...stout the style? or Stoudt's the brewery?

Mike the brewer from DFH said he would try to get tickets for Jeremy, Gabe and I to Stoudt's beer fest this weekend. It was sold out. We'll see what he says Friday.