The Bags are Packed, The List is by the Phone 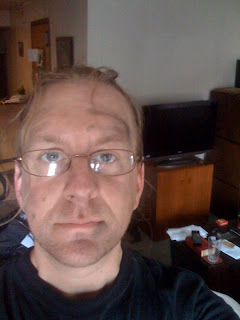 What would you do for good beer? Well, try topping Chris LaPierre (head brewer, Iron Hill-West Chester), Don Russell (aka Joe Sixpack), Jeff Appeltans of GoCycling, and three other beer and cycling enthusiasts as they left this morning from the Philadelphia's Museum of Art...destination Ommegang Brewery in Cooperstown, NY. 354 miles to be exact, give or take a few revolutions of the big sprocket.

Chris, from the picture, apparently took last night off to tune up his bike. It looks like, maybe, perhaps, that he won the battle. Don, on the other hand, was working the crowds over at the Philadelphia Zoo, signing his recent Philly Beer Guide. I was due to be there, but wimped out at the last minute (like, 5:50pm to be exact) and headed to West Chester instead (beer finds at Spence Cafe, more to come later). But, I'm assuming that Don has held up well and was ready for the early morning departure...cuz, that's what professionals do! There was some speculation that they would go with the bike design in the following picture, but saner heads appear to have prevailed. (It would have been nice to have one of these surreys for the Ocean City boardwalk this past week...oh wait, OC's dry) 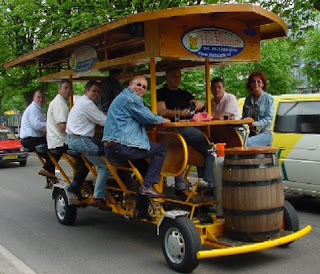 Over the next several days, The Brew Lounge will be Ommegang BCTC full-time, all the time. Following below is a brief itinerary for the spandex-clad boys (and girl). Chris will be sending updates on a daily basis, connectivity willing, with photos and blurbs about what they've seen and drunk along the way.

May I say it again? Can I? This is just another great example of the kind of world that we can live in when we realize that responsible beer making and beer drinking can go so perfectly well with a physically fit lifestyle. I'll add more to these comments as the days go by. Until then, let's get ready for Ommegang.

Hah! I was so proud of myself for finally doing a 5 mile run on Saturday.. then about 5 minutes later I heard about this bike voyage up to Ommegang. Crazy!

I am still planning on bringing up my running stuff if you want to do some hangover-expelling running on Sunday morning... :)

I just want to see them ride back Sunday morning! :>)

For the 3rd year, I'll bring my running clothes once again and see if this year's morning after is any different than the last two!

Any other crazies out there bringing running gear?