And, then there was Wednesday There was good reason that I was looking forward to our last full day in the Bay Area. It was the Cask Ale Festival at Thirsty Bear. Six hours of cask-conditioned beer and cheese. Plus, a hotel room and a day of gallivanting throughout the city. But I really wanted to see how cask beer is growing up on the West Coast. Just as other beer trends have moved east to west (well, except, of course, for hop-blasted beers which have come the other way), I wanted to see how cask-conditioned beer is taking root in the Bay Area. When I began traveling to the Bay Area around 10 years ago, and even as recently as three to five years ago, 'real ale' was just not really all that common of a find around the city or the 'burbs. 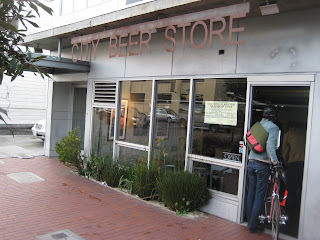 We left Walnut Creek and arrived downtown with enough time to walk a few miles around the city and check into our hotel room on Howard Street. The hotel was central to Union Square and Thirsty Bear. This meant we could easily walk to City Beer Store (on Howard), Scala's Bistro (on Powell, just off Union Square), and 21st Amendment (on 2nd Street). In the middle of all of this was the cask and queso festival at Thirsty Bear, just a couple of blocks from the hotel.

What makes a Beer Event? Scala's Bistro was our lunch stop. I knew that Jesse Friedman from Beer & Nosh was hosting a beer dinner there. So, I figured that Scala's must have at least a mediocre beer list. Of course, right? Well, not exactly. With Anchor Steam as its sole quality tenet, Scala's beer list is quite lacking. Even the server had no idea if and what was on the beer list. Didn't even know that there was a beer dinner that evening, until he went and asked the manager. And, yes, this seemed to be a seasoned waiter, not a part time uninformed employee. Nonetheless, I looked at this as a venue where a beer event might be a very good idea. In other words, the kind of idea that, if successful, could lead to better beer menus at Scala's down the road. Any way you approach it, lunch (probably dinner, too) was very good at Scala's. After a short meander around the city, we wound up at City Beer Store, with the opposite level of pretension as at Scala's.

A new neighborhood for good beer The farther away from Union Square and Market Street that we wandered, the more we wondered if we could really find decent beer. But, of course! We didn't walk any closer to the Mission District, where we could find Monk's Kettle. But, City Beer Store appears to be a ground floor entry in their neighborhood turnaround. 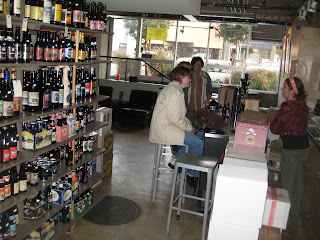 Owners Craig and Beth were hosting a handful of events during SFBW and had just taken delivery of the latest Russian River goodies (Damnation, Consecration, etc.). With hundreds of bottle varieties available to go or to drink on premise and with growler fills to go, City Beer Store is worth the extra few block walk or a a short drive out of the way to get to. They've been there for a couple of years and look to have solidified their place on any beer hunter's voyage through the Bay Area. 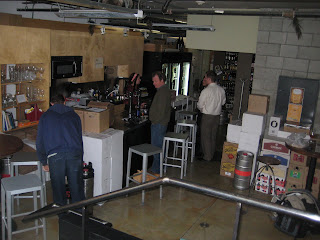 And then it was time to get Real Thirsty Bear has always interested me. While the beers have always been good, but rarely especially wow-ing, the Spanish food, the ambiance, and the weekly cask-conditioned beer on the bar have always been enough to give me a well-rounded beer experience in downtown San Francisco not similarly matched around the City. 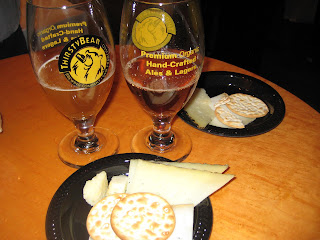 Based on the (low) ticket number that I received when I purchased on line and that the event was scheduled for six hours (at only $35) made me think that this event might not be going over all that well in San Francisco in a week of Strong Beer, Barleywine, Sours, Barrel-Aged, and the like. 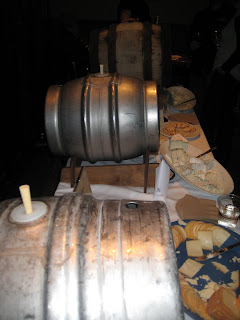 Even when we first walked in at 6pm (starting time: 5pm), the crowd didn't convince me that they were ready for cask-conditioned beer. But, by 7pm, the crowd began to fill in the spacious upstairs at Thirsty Bear and lines began to form at the tables. The setup had three casks at each of the four tables, with a special cheese in front of each cask. I didn't get the impression, though, that each beer was meant to be exclusively paired with the beer directly behind it. Our approach was to taste each beer on the table, randomly pairing with each of the three cheeses on the table. Then, we'd pick a favorite beer, get some more of it along with some more cheese and then pick a winning beer and cheese pairing from that particular table. 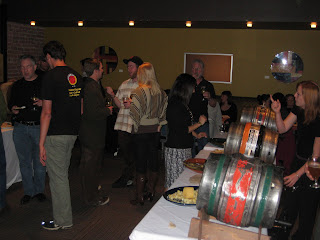 We made our way around to each of the four tables named Gold, Amber, Brown, and Black. The progression from table to table appeared to correspond to the gradual, though sometimes imperceptible increase in flavors and strength in ABV.

In short, our overall favorite of the evening was 21st Amendment's Bitter American (hey, I know a few of them!) paired with the Garrotxa (a Spanish goat cheese). Even at 3.6% ABV, this beer and its hop flavors shone extremely well as a cask conditioned beer.

A close second went to Moonlight's Twist of Fate when paired with another Spanish cheese, this one an unpasteurized sheep's Idiazabal. This is a well-balanced beer, with a bit more alcohol that stood up well along side the cheese's strong flavors. Also worth mentioning was Magnolia's perfect Cole Porter with St. George's Matos (cow) cheese from Santa Rosa and Beach Chalet's hoppy Presidio IPA and Drake's IPA both paired with either the Rouge et Noir brie from Petaluma or the Humboldt Fog from Cypress Grove in Humboldt.

Who knew that dinner could be comprised of a bunch of cask conditioned beers and a dozen different cheeses? Minor as my suggestions may be, next year I'd like to see the Bay Area breweries contributing twice as many casks for this festival. Also, if Thirsty Bear hosts again, I'd like to see them put out a few more of their tapas-style plates to accompany the cheeses and beers. Another $5 or $10 per person should cover the cost I might think...and at $40, attendees would still be getting a fair shake.

A few T.U.D.s With one more stop at 21st Amendment to drop off some gifted beer and to pick up one last Monk's Blood, my San Fran Trippin' was coming to an end. One more Pliny the Elder in the hotel room before bed, and a Special Holiday Collaboration Beer (Stone/Jolly Pumpkin/Nøgne-Ø) the following morning before our flight (sure, it was breakfast and y'know, 50 lb. weight limit, right?!) and it was time to call an end to another wonderful trip to the Bay Area. 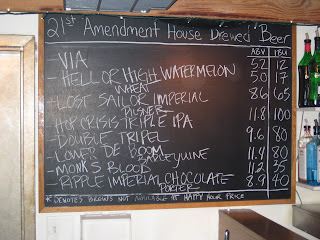 Making their way home with me on the flight was the Deschutes The Abyss, Russian River Consecration, and Firestone Walker 12th Anniversary (up just a bit from the $9.99 that I bought the 10th Anniversary for back in 2006).

Is it fair to compare SFBW and PBW? No, not at all. These are the two best beer regions in this fine beer-drinking country of ours, in my opinion. The number of events means absolutely nothing. The percentage of events scheduled that are at least of above average quality is what counts and in both city's cases they come out way ahead of any other city/region in the United States, perhaps even Planet Earth.

But, okay, you force me to call a winner? The only difference could be in the acceptance of cask ale. Even though there's a noticeable appreciation of cask-conditioned beer in the Bay Area, it's significantly more noticeable (for longer) on the East Coast. And, considering Philadelphia set the Beer Week standard last year and is poised to continue the preeminence in 2009, I leave the mantle with Philly.

Now for a bit of detox before Philly Beer Week begins.
Written by Bryan Kolesar at Sunday, March 01, 2009