A Beer Run at Dock Street, A Cask Event at TJs, A Perfect March Saturday

I normally don't tend to jump too deeply in to the political and controversial fray around here. Every once in a while, extraordinary circumstances practically demand that I do so. I may not always be the most qualified to do so, and I attempt confine my commentary to where I don't sound like a complete idiot.

That being said, I jumped in to something deeper than the kiddie end this morning. It's a fun way to write occasionally, but I couldn't continuously keep up that particular controversial type of writing for too long. It's just not me. I prefer, as I'm sure you know after almost five years, to focus on the positive and accentuate all of the good that happens in this wonderful world of craft beer, with a particular emphasis on both the beer and the people who make and sell it. There are enough other places that you can catch up on cutting, timely investigative reporting that turns over the good, the bad, and particularly the ugly in the industry. 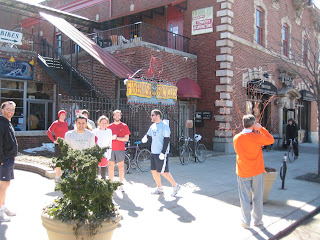 (For 15 runners, it was a chilly start in the shade at Dock Street, but, uh, just what is exactly is Kevin doing behind that bush?)

So, back to the good stuff. And this one's more personal. As you probably were aware, I conducted the first of three lead-in runs to Philly Beer Week yesterday. As in past years, I've teamed up with Dock Street Brewery in Cedar Park (west Philly) to serve as the base for the runs and a great excuse to drink of their great beer and eat of their fresh and creative pizzas.

Rosemarie Certo and her staff continued to be the generous hosts again yesterday. A group of 15 runners took off for a short run down to and around (University of) Penn (sylvania...not Penn State for you out-of-staters), looping back to 50th and Baltimore. The weather could not have been more agreeable and the post-run nourishment could not have been better. 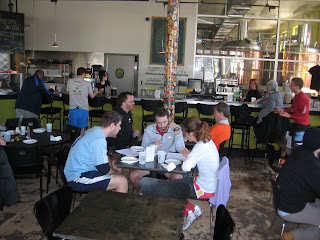 (Renourishment took place over a Dock Street-themed quiz after a 6K run around West Philly/University City.)

From a Bohemian Pilsner to Bubbly Wit (a consensus favorite) to Man Full of Trouble Porter and Sexy Beast stout, there was a flavor and weight of beer for every palate. Is there anyone who doesn't think that the name change to Sexy Beast was a very, very good choice? I love the name and the connotation better than that of Sexual Chocolate. 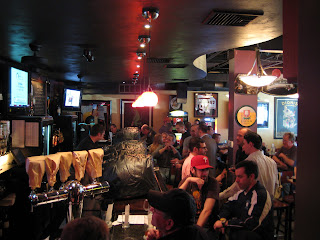 (A solid crowd kept the bar area comfortable, but busy, all afternoon until the evening dinner crush came. A successful day from start to finish at TJs.)

My wingwoman, Tracy, and I made our way back out to Paoli at TJs where we met up with her hubby, Mr. Sierra Nevada/Patrick Mullin, and a gaggle of very well-behaved and approving fans of cask-conditioned beer. Though, mind you, there was a chance for misbehaving since, if my count was correct, there were only two beers under 8% ABV. While it would have been nice to have a couple of more "sessionable" cask beers, the ones that were featured certainly packed a whole wallop of flavor to go along with the booziness. 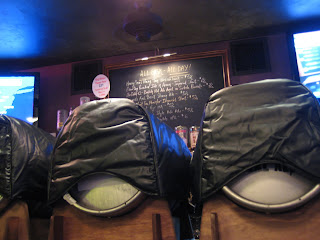 This type of event, where all of the traditional tap lines were shutoff and the bar was lined with gravity-pouring kegs, was a first for TJs and from all accounts was a huge success. They were looking forward today to polishing off the last drops of what was pouring yesterday and they've saved one, the Stone Sublimely Self-Righteous, for the big event on March 20th. 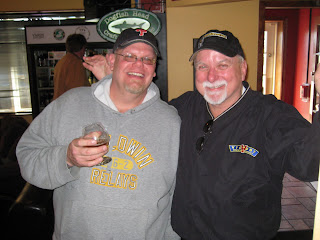 So ends a stellar weekend full of events. Think this weekend was a classic? Just wait until next weekend, that of Philly Beer Weekend. Good times, my friends...good times! 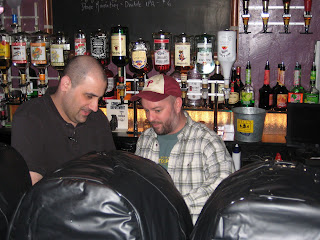 Awesome run (as usual for all the brewlounge beer runs.)

However, that 1st picture is terrible! I look like I am urinating on that bush!

Thanks Kevin....my final decision was that I thought the picture was humorous rather than embarrassing, but will understand if you'd like me to remove it. Great to see you again, looks like you're well on your way to a successful Broad Street Run!

Nah, the picture is funny and amusing - leave it :)

It's good to see that the run was a success! I missed this one, and hopefully I can make the next one.