Back to Hawaii, Part 1
I was "moved" by my trip to Hawaii. Much like many of you, I'm sure, when you go to any place of extreme natural beauty and wonder. Well, maybe I wasn't as overwhelmingly moved during the first half of our trip to Oahu. After all, I was working most of the day long and only able to partake in a limited amount of nightlife during the week. Plus, the jetlag for the first couple of days had something to say about it too. Though, between Pearl Harbor, the drive up to the North Shore, and my invigorating--though, warm--run around Diamond Head, there was enough on Oahu to satisfy my soul during the first week in Hawaii. 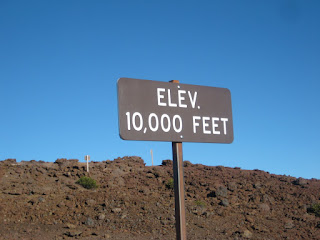 (You need to arrive very early at Halaekala to get a parking spot to observe the sunrise; but, once at 10,000 feet there's absolutely no regret over lost sleep) 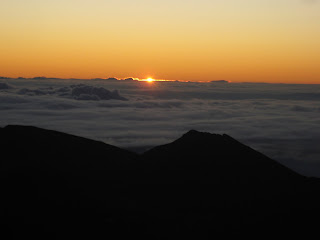 (A very early morning drive up Halaekala rewarded us with one of the most amazing experiences of my life...yes, it was that moving)

But, once the work was complete, Patty and I moved on to Maui where the unwinding could really begin. And, from the descent into the local airport through the entire week, I'm not sure there was a moment when I wasn't simply in awe of my surroundings. If you thought the beer on Oahu sounded just okay, then you're in for a treat on Maui. Granted, you're still not going to experience the level of good beer that you're likely accustomed to at home, but with solid Maui Brewing Company beer mixed in with a wide variety of tropical drinks, you're not likely to go thirsty for good beverage too long when on the island of Maui. 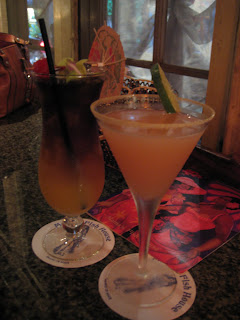 (We just might have found the best Mai Tai, and a Sazerac for good measure, at Halekulani on Oahu and Mama's Fish House on Maui) 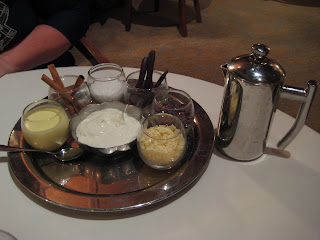 (Coffee served any way you'd like it, another island treat)

Oh, but wait. I did say that I would pick up this segment with a quick recap of one other stop on Oahu...the Yard House in Honolulu...that I neglected to mention in the first half of this double-play posting. Oddly enough, I'd never been to a Yard House before...surprising given the amount of travelling that I tend to do. They have around 50 or so locations around the country, primarily in states west of the Mississippi. Like the Ginger Man, Flying Saucer, or other (massive) multi-tap beer houses, Yard House aims to serve up a bevy of brews by a peppy staff in a noisy atmosphere. I gather this from the pictures on their website in addition to the first-hand experience that we had in Honolulu. If it's not true at other of their locations, I'm sure that one of you may correct me here. 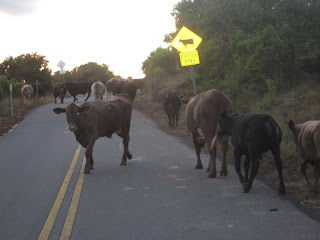 I knew, too, that Maui would be filled with plenty of physical exercise as well. From swimming and snorkeling to running and climbing to walking and biking. (er, we never got around to biking.) It's no wonder that Hawaii was recently named the Healthiest Living State. It truly does seem that the locals do not take their place of living for granted. I can't tell you how many I spoke with who claimed to be too caught up in doing outdoor type of activities as opposed to something more vegetative like watching television. Ah, but that's another topic for another day.

Let's get into things of barley and hops here. It didn't take long after arriving in Maui for me to wander over from our resort to the neighboring ABC Store of ubiquitous Hawaiian lore to find some local brew. As on Oahu, there's absolutely no trouble in finding Kona beer. But, what I was really looking for was from Maui Brewing. 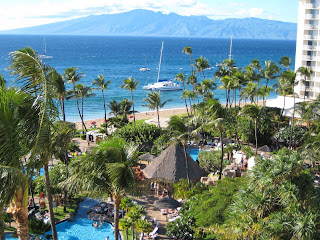 (Paradise? Quite possibly...as seen from our hotel room in Kaanapali)

The resort that we stayed at in Kaanapali was equidistant between Maui's brewery facility and its brewpub operation. So, unlike on Oahu, where finding Maui beer was more difficult, there was little difficulty on Maui (are you keeping up here with the name of the island versus the name of the brewery?). The ABC store carries a variety 6-pack of cans from Maui, two each of their CoCoNut Porter, Big Swell IPA, and Bikini Blonde Lager. Of course, the Bikini Blonde would make for a perfect poolside companion and the Porter a nice cool evening beer. And, cans? Poolside drinking is an ideal location for toting this convenient package. 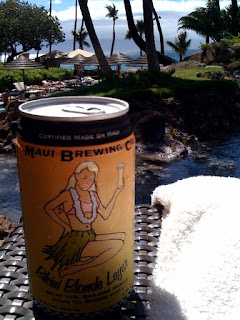 (Scenery at its best!) 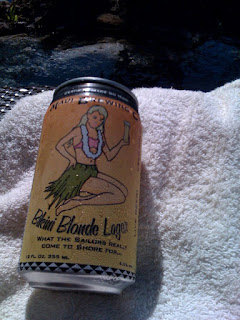 (Taking a load off)

Other than the 6-pack pickup (one of which would later be escorted home in my suitcase to Philly) at the ABC store, our most significant beer excursion on Maui was, naturally, to the Maui Brewing Company. We started a few miles south of the brewpub at the brewery where they had just recently finished a new tasting room. We sampled a few and, don't call me cheap, were frankly a little disappointed by the tasting fee setup. The sample size related to the fee basically worked out to a standard barroom cost of a pint. So, we only had a couple figuring there'd be much to find at the brewpub for dinner. No one ever accused Hawaii of being inexpensive, eh? 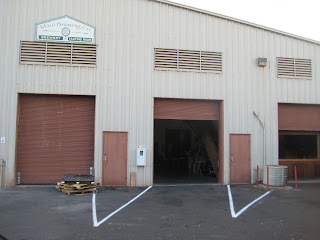 (On approach to Maui Brewing Company in Lahaina) 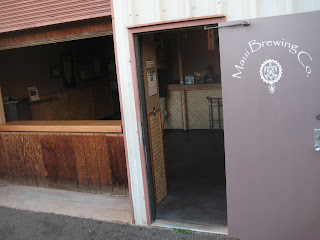 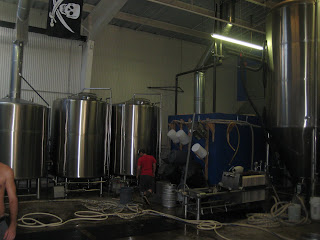 Not knowing when this visit would fit into our schedule, I didn't call ahead to arrange an introduction to owner, Garrett Marrero. That was somewhat disappointing because I would have loved to have some time to discuss island brewing and beer tastes in Hawaii, sustainability, and success over such a relatively short term.

Nonetheless, we took a tour of the brewery, with a fine young gentleman showing us all around. (I had to say fine young gentleman, because the danger in letting this posting go for so long is that I, unsurprisingly, have since misplaced my notes which included our brewer/tour guide's name.) At the time, he was recently new to the brewery. He came from southern California where it seems many locals have moved from...just getting closer to paradise I suppose. We crossed paths with a couple of honeymooners from the Pittsburgh area and wound up sharing a table with them at the brewpub, a few miles up the road toward Kapalua. 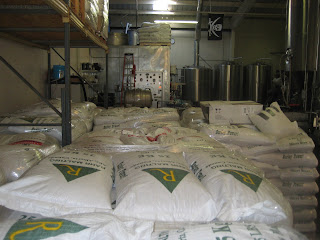 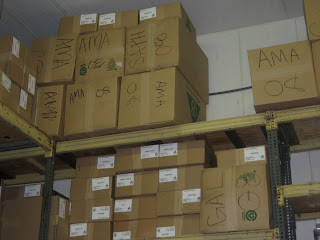 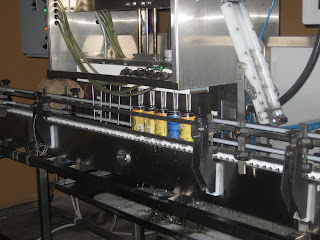 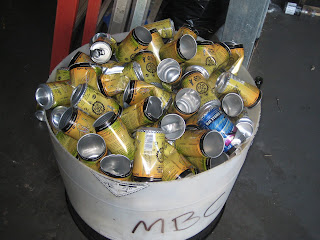 (Are these rejects or consumed cans?!) 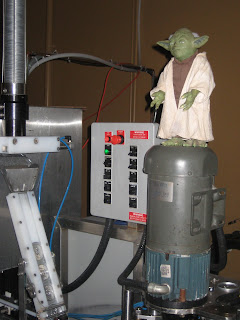 (Maui's version of a good-luck charm) 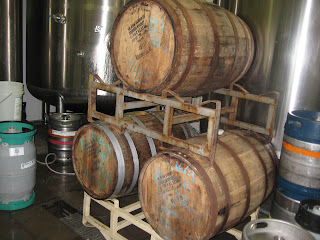 (Maui, like many, does barrel-aging too. This appears to be the Black Pearl, a beer being aged in various barrels to be blended for a 5th Anniversary Beer in 2010) 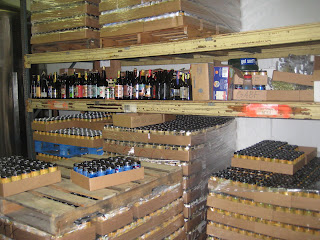 (The cold storage at Maui's brewery has a bunch of their own beer as well as plenty of other "market research!") 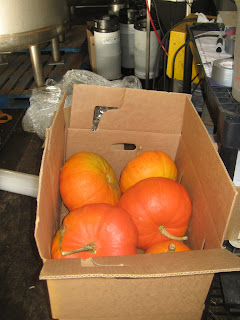 (You think of pineapples, not pumpkins, in Hawaii...but at Maui Brewing, they think of everything)

The brewpub is located in the elbow of a strip mall...not so glamorous, I suppose...but it's what's inside that counts. What's inside includes an extensive draft list of Maui's finest, close to 20 of them. In a sense, it reminds me of Victory here much closer to home. Folks outside the region won't get a whole lot more than Prima Pils, HopDevil, Helios, V-12, WildDevil, Golden Monkey, and Storm King Stout. But at Victory's pub, as at Maui's, there are at least a dozen or more outside of their core brands that give you a glimpse into the brewing prowess of the staff. 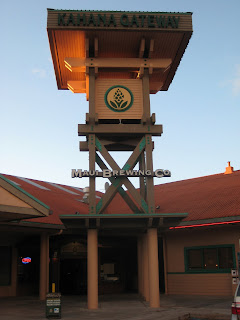 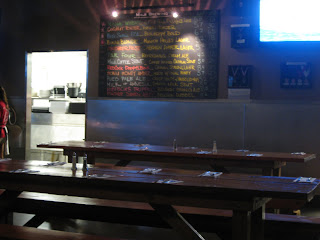 (With this type of brewing at Maui BC, it's pretty safe to say that this is home to the Hawaiian Islands' most interesting and diverse brewing scene)

For example, the recently crowned bronze medal-winning Father Damien, the beer (in honor of the recently sainted Damien, the local priest who was canonized the Sunday before we arrived in Maui...for whatever it's worth) was available on draft as well as big, tasty beers like their Maui Coffee Stout, Hibiscus Trippel, and Red Cock Doppelbock (try ordering that one with a straight face) that might not ordinarily associate with island beer drinking. We spent a shorter-than-average time here, so getting into a sampling of the remainder never happened. 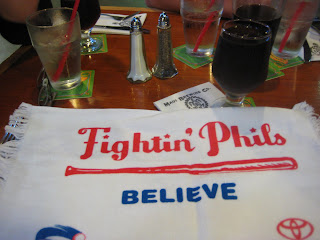 The food at Maui Brewing matches up well with the diversity of beers. Serving as our dinner, we dabbled in Chili and sandwiches. And, of course as any proper Phillies Phan would do, I brought my rally towel to add to the local color. Funny how no matter where we went from the airports to the resorts to the bars and restaurants and luau, local Phillies fans weren't difficult to spot.

Since this really wasn't a beer trip we were making to Hawaii, I didn't go out on much more beer exploration. And, that frankly is a good thing. There's way too much to do to get bogged down in bars in Hawaii. It's great to know that when you want a meal that you'll, at the very least, be able to find some very good local beer. According to some of my research, though, very near the airport in Kahului there are a few joints to find some good beer and interesting scenery like: Brigit & Bernard's Garden Cafe and Kahului Ale House.

After taking yet one last day on Oahu before flying home, we arrived home in time to take in the Phillies NLCS-clinching game at Citizens Bank Park in Philly...see, there's always a beer angle to each part of my stories. A couple of Sly Fox and Flying Fish drafts at the ballpark made the night all that much more sweeter. Funny how we went from watching the Phillies six time zones to the west and in the sun and weather 30 degrees warmer while sitting at the poolside bar to watching the game in the cool autumn nights of the East Coast while wearing jackets. 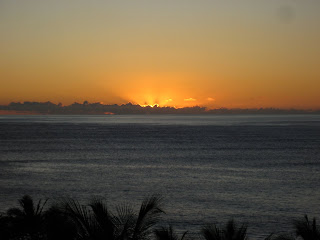 (As with all vacations, they must eventually come to an end. Our last night on Oahu brought us yet another spectacular sunset from our hotel room balcony) 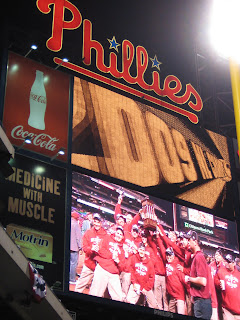 (A very pleasant, and most appropriate, welcome home to Philadelphia)

Back to Hawaii, Part 1