Rolling out the barrel at Yards Real Ale Invitational 2010 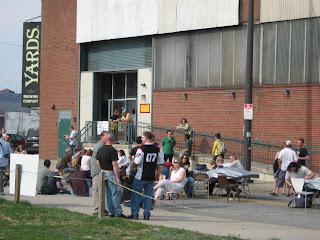 Don't cringe, this isn't sarcasm but, really, the Real Ale Invitational at Yards yesterday was one of the nicest festivals I've been to in a while. I could use my handy, dandy thesaurus and try to come up with loud superlatives to describe what a great time (oh, there's one..."great"!) it was. But, nice seems to fit quite, well, nicely. Now, all you brewdudes around the Yards house, don't go scrambling for your PR damage control; this is really a great compliment. 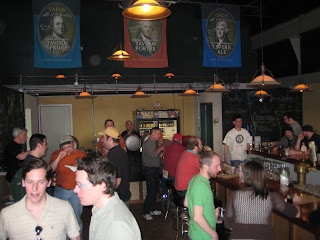 It was a nice weather day. Beers from breweries all across the city and suburbs were sitting nicely in their firkins around various nooks of the brewery and were pouring anywhere from 4% to 11% ABV and every notch in between. All told, there were around 25 beers available for the masses that showed up. And what a nice gathering of masses it was. The overall tone of the festival was civil and polite, but sure not stuffy. Family-oriented (lost count of the number of children), but yet still a beer festival at the heart of it. 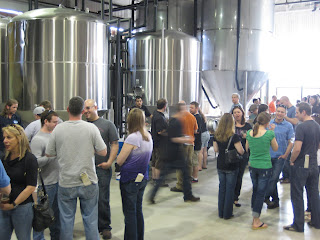 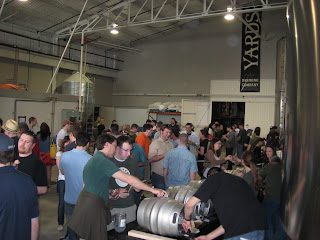 And, with the spacious brewery floorspace and the doors to outside propped open, not to mention the closed-off street to provide even more space, festival-goers could breathe quite nicely and make it from the front of the brewery to the back with no problem. Approximately 250 passed through the doors over the 4+ hours, including the VIP session, and it felt like Yards could have hosted double that amount, though the fire marshal might have had something to say about that. 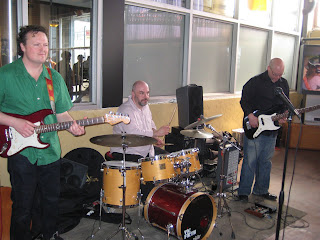 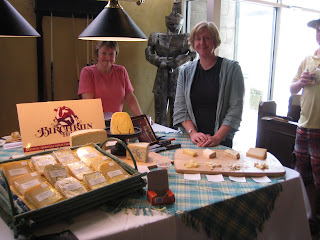 In addition to the 25 cask-conditioned beers, there was cheese from Sue Miller and her Birchrun Hills Farm, chocolates from Betty's, and a spread of more than just finger-picking food from Diverse Catering. The Jazz Horses kept every one's toes tapping throughout the afternoon

There were some big and crazy flavor beers, but the amped-up, over-the-top beer geekerie kept their usual fever pitched volume to an enjoyable level. In no particular order, here are some of the beers most talked about and that I tasted as well included: 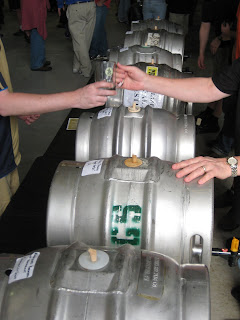 ~ RCH's Pitchfork Bitter from England, at 4.3%ABV with soft fruit flavors, was a real nice way to start the day...and to go back for a bit of a palate reset.
~ Wintercoat Mols Øl from Denmark had sprucey and slightly earthy notes (apparently strained through Juniper branches say the notes) to it and got even better when some Birchrun Hills cheese came along for the ride...particularly the blue cheese
~ Kalamazoo Stout from Bell's in Michigan screams out to be served from the cask, and deservedly so...as does the Joe Coffee Porter from Philadelphia Brewing, Stewart's Highlander Stout, Iron Hill's Pig Iron Porter, and the George Washington Porter from Yards. Did I mention how much more "Expressive" many beers become when served sans forced carbonation and colder temperatures? The malt bills on these five are perfect examples.
~ On the other side, the hops become much more "Expressive" in beers like Flying Fish's Exit 16. This was my first run-in with this recently released beer that is being called a Double IPA. If you're concerned about hop levels, I'm not sure if this, by taste alone, would qualify as a DIPA. That Casey and company deftly packed a lot of hops into this beer without walloping us over the palate with them. Will be anxious to try this on CO2 somewhere down the line...like maybe Varga next Monday. 4C from Nodding Head was another clear-cut winner in the 'hops on cask' category.
~ If time had permitted, I would have loved to try some Hopsolutely from the Lehigh Valley's Beer Works. I've recently had it from the bottle, and I'll just leave you with how this is a bottle that absolutely should not sit around for too long before enjoying.
~ Quaker City Stout from Manayunk would've been yet one more that I wished I'd seeked (seeken?) out. I'm hearing that Vince (sorry, Vince/Doug, they must sound the same! Doug is the one that moved to Manayunk, Vince is still, in fact, at North Wales) is doing nice things and raising the brewery's profile since moving down from Iron Hill/North Wales and I would've liked to gain some first-hand experience.
~ Oh, and a gratuitous shout-out to Elysian and its Prometheus IPA. Maybe because I've had this very decent northwestern IPA before, I passed on it. During the train ride home, I'd begun to regret it. 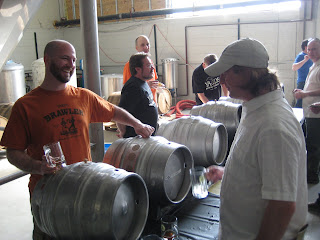 Let's see, how to wrap up? A nice day to have some nice beer and food around nice people listening to nice music. Yards---nicely done. I've never felt more comfortable using a simple word like nice as many times as I have here in the last 800 or so words. When I come away from a beer event like this with such a good feeling, I can't say it any more simply.
Written by Bryan Kolesar at Monday, March 22, 2010