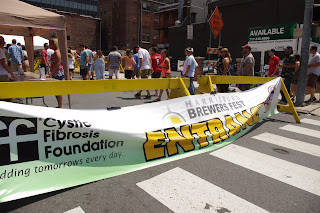 Just as I'd begun to write off most beer festivals as the "same-old, same-old" and more trouble than they're worth, I finally, after all these years of being asked, get myself to my first Harrisburg Brewers Festival. Patty was under-the-weather, so I grabbed my nephew Ryan who is always up for a good beer expedition.

Controlled crowd of roughly 1,500 per session spread out comfortably across three city blocks.

Nearly 50 breweries bringing both at least a not-quite-so-core brand or two in addition to their core brands.

Plenty of brewer support (hotel rooms, pizza, ice on demand, and an "honorarium")

Big donations to a reputable cause.

These are just a few of the reasons I heard yesterday for why brewers, reps, and attendees all love the Harrisburg Brewers Festival.

The festival is now in its 8th year, with Cystic Fibrosis as title sponsor and beneficiary and Tröegs as the chief organizer. (Tröegs' future involvement -- after their move to Hershey -- is still undetermined and under consideration.)

If I recall correctly, I believe I heard quoted yesterday that proceeds donated to CCF last year were in the $110,000 range. I've already seen publicized today that $115,000 is the donated amount after this year's fest.

Should make other "charitable" beer festivals blush embarrassingly in comparison. This is not, by the way, a lone editorial comment.

Walking around the festival, it was more fun spotting the not-so-usual suspects lining the streets with their tap handles than trying to figure out who wasn't there.

Straub...Old Forge...Market Cross...Marzoni's...Fat Head's...Otto's...even Brew Works and Union Barrel Works. A few out-of-staters like Oskar Blues, 21st Amendment, Capitol City, and Ithaca. All amongst just about all of the local guys you'd expect to see. 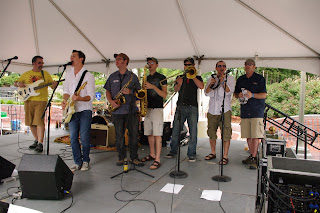 On stage, the Tröegs Brewery house band, Starsan & the Chill Haze Horns fronted by Ed Yashinsky, rocked the middle set of the day.

It was probably good that I had family obligations at night back near Philly. It kept me from having a second (or third, fourth.....) Moscow Mule at McGrath's, one of downtown's pre-eminent craft beer bars and all-around solid local watering hole and gathering spot in the shadows of the Capitol building. The drink is simply vodka with ginger beer and a lime wedge. It's dangerously refreshing and easy-to-drink...quickly. Thank you, Mr. Mullin, for the introduction. 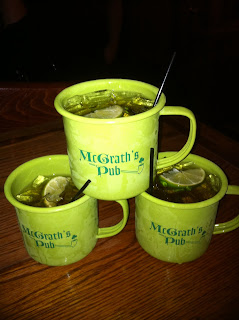