Meeting Florian Kuplent and his Urban Chestnut beers at Capone's: 6/17/2011 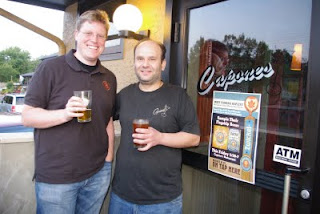 I needed to stop by and pick up a bottle that Matt was holding for me at Capone's this past Friday night. I wasn't looking to make too much out of my first post-PBW Friday night.

So when I saw that Urban Chestnut beer would be at Capone's, along with founder and brewmaster Florian Kuplent, I figured this might be a nice way to spend an hour or so.

That plan worked out quite nicely.

Mike Gretz, your if-he's-not-a-Philly-Beer-Geek-I-don't-know-who-is, was helping to introduce Florian and his beers to the region. Kuplent drove in from Missouri with his wife, native of New Jersey, and the kids for barely a two day visit to the Philly area while his beers are on a 60-day trial registration with the State.

We had a pleasant chat about his departure, along with many others, from Anheuser-Busch to the realization of a lifelong dream at the 20-bbl Urban Chestnut brewery. The name is a bit of an homage to German beer gardens.

He's been going at it now for around six months and is ramping up quickly to meet local demand first as he also tests the waters abroad in the well-renowned Philadelphia market.

Only two beers came along for the introduction and they were certainly two wise choices. He brought the flagship and very well-made Zwickelbier and the Winged Nut, the first in the 'Revolution Series'.

The latter is a 6.5% ABV ale brewed with finely-milled chestnuts which leaves a sweet, nutty flavor to the beer. But, not too sweet or cloying to be difficult to drink; a nice beer for sure.

It made for a perfect follow-up to the quite enjoyable 4.8% ABV Zwickel, from the 'Reverence Series' which celebrates traditional European brewing methods. The Zwickel is unfiltered, though just slightly cloudy, with tons of tasty Munich malt flavor and a just-noticeable undercurrent of Noble Hop bitterness mainly from Hallertau Mittelfrüh. Sessionable for me and would be quite happy with this all-afternoon long.

If you can get to Capone's this weekend, you may still find them on tap, but of course there are no guarantees. If you miss them at Capone's, keep your eyes, ears, and mouths open for this fun new brewery from Missouri.

With brewery distribution expansions and contractions a growing conservation and debate of late, how long Urban Chestnut will be in the Philadelphia market remains to be seen; but be sure to check them out while it's here.
Written by Bryan Kolesar at Sunday, June 19, 2011