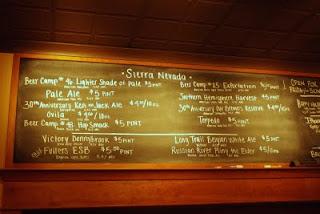 A full room of people couldn't do the job that you'll be counted on to do today: kick a keg. Too many very decent beers from Sierra Nevada, its Beer Camp, and beyond were on draft last night at Station Taproom in Downingtown, Pa. You'll be in luck stopping by today as all on the list above still remain available on draft today.

As could be attested to by the temperature at the restaurant, there was no doubt that folks turned out for this event. If you could say there was a feature beer, it was probably the ExPortation, the ExPorter brewed by local Philly beer people (click back here for more details) last year at Beer Camp #25 which later had a portion of it shipped off to Santa Rosa for a little wood barrel-aging at Russian River Brewing.

Now, the ExPorter's got a sour (but not too much so) character, has been named ExPortation, and has been served during Philly Beer Week. The last of the kegs are making their rounds at places like Station Taproom. Word has it that there are still at least a couple more in "safe storage" at Teresa's Next Door for future fun.

Sean McGettigan's (owner, Station Taproom) Lighter Shade of Pale from Beer Camp #46 and Jim Crane's (Goshen Beverage) much-more-roasty-than-hoppy 'Double Black Ale' from Beer Camp #48 were also on tap as were other Sierra Nevada goodies like Southern Hemisphere. Oh, and speaking of the good people at Russian River, Pliny the Elder was on tap for good measure and more California representation as well.

Not too much to report otherwise at Station Taproom. We focused as much on the dinner that we desperately needed by the time we arrived. Focusing on the food at ST is easy because the kitchen continues to put out quality food to accompany the stellar beer list.

Last night, it was an awesome arugula salad with goat cheese, candied pecans, and roasted beets (I could eat these every day), Thai Red Curry Mussels (signature dish at ST), and a chorizo/red pepper sandwich. Oh, and my fingers found their way across the table numerous times into a bowl of awesomely-sea-salted edamame, or soy beans if you will. 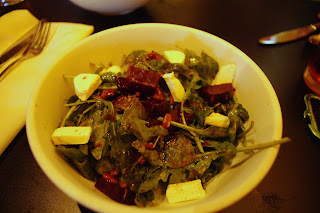 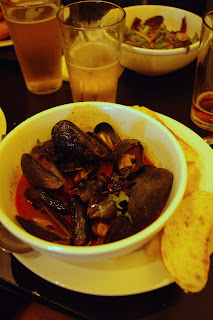