(Links to video precede the pictures farther below.)

The opening weekend of Philly Beer Week 2013 came to a slightly cooler, interrupted by brief passing showers, end with festivities of every stripe going down around the city.

Each year K&K does this event, a) it gets larger, b) it attracts more folks from the industry who want to participate in a couple hours of fun 'n' games, and c) it remains an event where you know, where you can trust, that K&K will do its job to secure great beer, but that isn't the focal point of the event. That last point, to me, is what differentiates truly special/unique events during beer week from the more run o' the mill types. Getting people involved, entertaining, and providing a fun atmosphere where it's not just beer geekerie sitting around, pontificating a beer's merits, and checking it into an app.

Not that there's anything wrong with that. Usually.

So how about those beers, eh mister beer geek?

Yes, the beers were special (as would be expected) during the Throwdown at K&K. The two that stoodout and wound up multiple times in my hand were Allagash's FV-13 and Golden Brett, two beers aged in oak and treating folks to a wild ride of fruit and tart and sweet and rich. The Golden Brett comes across as cleaner and more refreshing, if you will, where the FV-13 has a wider range, and is a bit boozier, of flavors.

Also of note was my second Bell Ringer IPA from Victory. It was on CO2 and was just as enjoyable as the night prior at Johnny Brenda's where it was being served from a gravity cask. And, as their website warns "not to be fooled", I was. No way I'd guess this clocks in at 9% ABV.

The party rolled on with many moving into Center City and Nodding Head where owner Curt Decker and the team were hosting Tomme Arthur and his Red Poppy, Framboise, and several other tasty sours from southern California.

It was a bit of a sign of things to come when next Tuesday, if you haven't heard, Nodding Head will be doing a very special brew day with De La Senne and guest appearances by Vinnie Cilurzo (Russian River) and again Tomme Arthur. Breakfast bites will be available as well.

With time for just a quick stop at Standard Tap, we buzzed in and saw owner Willam Reed holding court with three huge GABF 2012 winners. Tröegs (Hershey) won mid-size brewery of the year, Devil's Backbone (Virginia) won small brewpub of the year, and Church Brew Works (Pittsburgh) won large brewpub of the year. They each had multiple beers of theirs pouring, most of which are not typically available in Philly.

They also had a beer that all three collaborated on brewed at Tröegs. It's a black rye IPA and it was being served on the handpump. Interesting beer with an earthy hop profile and definitely worth checking out should you see it around (apparently it's tagged as Scratch #97).

Great exposure at Standard Tap, one of the city's most comfortable pubs, for these two out-of-town excellent breweries and, as always, for our home-region Tröegs.

That might be about it for me for a few days. It may even turn out to be the first year where I essentially take off the full week from PBW events. Must keep the balance in life. Time will tell. In the meantime, check out the fun videos and pictures and let me know where you have been and what you've seen that's worth reporting.

p.s. Special thanks to Megan Moore of Evolution Brewing for passing along the picture of me keg racing at the Kite & Key event. 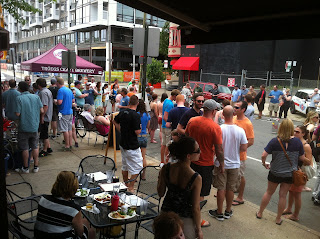 (A slightly cooler day, it's relative of course, brought larger crowd than ever for the annual Throwdown in Franklintown at Kite & Key.) 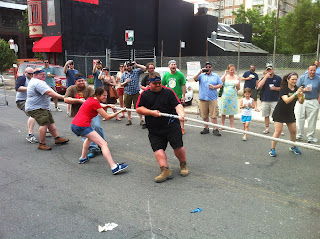 (The Yards Brewing team from Philly.) 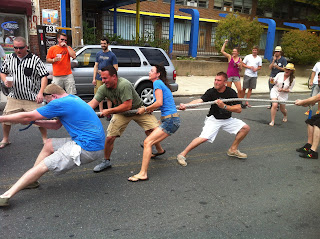 (The Victory Brewing team from Downingtown.) 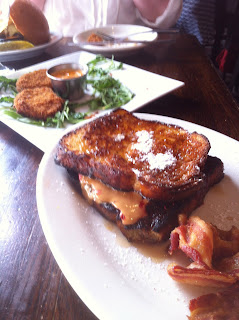 (Good thing I had sustenance to carry me through the keg race and tug o' war that I was recruited for.) 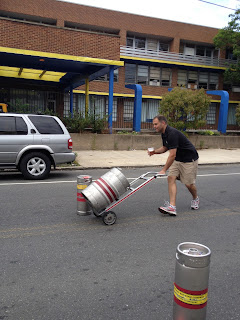 (Yours truly got recruited for the keg race.) 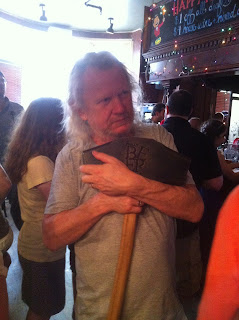 (Fergie Carey, temporary custodian, and loving/nurturing custodian at that, of the Hammer of Glory.) 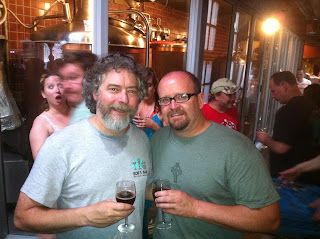 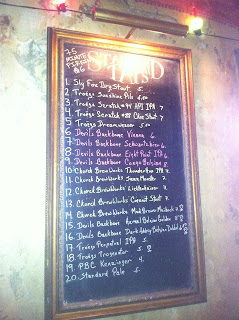 (Standard Tap featuring the reigning Small and Large brewpub and Mid-size brewery GABF 2012 winners. The Black Rye IPA on the handpump was the collaboration between the three.) 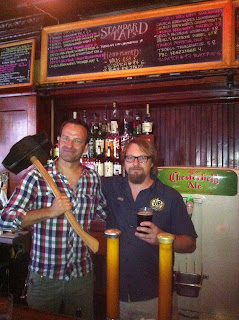 (William Reed of Standard Tap and Johnny Brenda's, with the Hammer of Glory natch, played host at Standard Tap to Jason Oliver from Devil's Backbone in Virginia.)