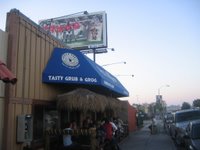 Update! Ok, I'm getting my act together now. Here's another update from one of my visits last week. Now with pictures! ;-) After a very long plane ride through two timezones I was ready to check in at the hotel. I dropped my bags in the room, did a little mapping and I was out the door to visit Pizza Port at 135 N. Highway 101, Solana Beach, CA. Pizza Port has expanded to three locations. The Solana Beach location was the first. It is located on the historic Rt 101 Pacific Coast Highway. In the interest of time I decided to take Rt 5 for most of the trip and hopped on 101 for the last 10 miles or so. So I drove out of San Diego, CA heading North through the hills on a 5 lane freeway. Once on 101 I saw people putting their wet suits on and grabbing their surf boards along side the road. You just don't see that in Pennsylvania. Just a little side note here. What a view! I had never been to California. Let me tell you I was blown away by the landscape. I don't think I can even explain it. Between the mountains, architecture and freeways I felt like I was in another world. 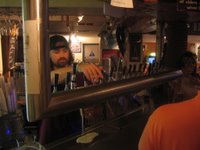 Ok back to the beer. I accidentally drove past Pizza Port and ended up in Del Mar which wasn't a bad thing. You know its hard to take in the sights when you are trying to drive responsibly down the road. Pizza Port seemed kinda small and unassuming at first glance. With a few tables outside and a buzzing crowd inside the closer I got the cooler this place seemed. Imagine a beach bar with surfboards on the wall, a juke box, a station to order food, a station to order beer and a varied crowd of all ages and appearance. Did I mention there were 25 taps including 15 Pizza Port and 10 guest beers? They also had a cask conditioned beer on tap. It took me a few minutes to decide on some food. I held off on the beer a bit due to my empty stomach. I spent some time in line placing my order for a small veggie pizza. Then after taking some pictures and looking at the tap list I asked the bartender what the craziest beer on the list was. He asked, "Alchohol wise or taste wise." I answered, "Taste wise." He drew a pint of a double IPA called Lou P. Lin. WOW! My palate was officially shredded! Mmmm...fresh hops in the nose and on the palate with just enough malt to back it up. 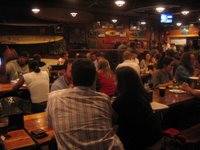 So, I sat down and took in the scene. What a comfortable atmosphere. A few minutes later a young man sat down next to me. He introduced himself as J.T. and proceeded to tell me what he knew about the beer scene in San Diego which was quite a lot considering he was new to the area himself. Soon my pizza was ready. THAT was some good pizza! It isn't New York style, but, it was fresh and loaded with garlic and vegetables...mmm. Then I saw that J.T. ordered a sampler and I thought, "What a great idea!". So I decided to order one as well. Here's a list of the beers I sampled that night: Lou P. Lin - Double IPA Ponto - Pale Ale Rock Reef - Rye Swammis - IPA Dawn Patrol - Dark Mild Ale 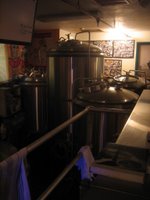 I would have to say that Lou P. Lin (lupulin reference) lives up to its name. All the rest were good as well. I wasn't as impressed with the rye. It doesn't really remind me of the Founders Rye that we tasted recently and I liked immensely. After a brief conversation with the cashier and purchasing a couple glasses to take home, I was ready...er rather...I had to say goodbye. Jet lag was going to set in and I needed my sleep. If you are in the area, Pizza Port in Solana Beach is a one of the best places to get good beer in Southern California. Don't miss it. BTW the Pizza is awesome! Original Post I'm headed out the door. Driving up to Pizza Port from San Diego. :-) Whoohoo...here I come!
Written by Adam at Wednesday, November 01, 2006

Always a great time when Lou shows up!

Glad to hear day 1 was a success!

Can't wait for the pictures...