Click Here For All Beer Event Reviews
I limited my carbon footprint this weekend by not going to State College, Portland, or Delaware (though my Union Jack's plans have changed...and, the weekend's not completely over yet!) and instead went 10 miles up the road to Norristown.

Kudos to the organizers of this event to improving on last year's installment. Keeping it brief here for you this morning, so here's a bullet point format of highlights from this year's Brew at the Zoo in Norristown, PA.

- Heat index of 90F and humidity of 51% when the gates opened at 6pm.
- Organizers kept the long line moving quickly and efficiently. Other events could learn from this.
- Greeted by a woman with a snake at the zoo gates. Many more animals to come later.
- Plenty of unlimited cheese, crackers, buffalo wings (Flanigan's Boathouse), hoagies (Main Street Pizzeria), soft pretzels, and water were available throughout the evening.
- Soniq Boom rocking the stage
- Primarily a regional beer festival with all local breweries/brewpubs represented with Anchor, Sierra Nevada, Rogue, Magic Hat thrown in along with imports from Gretz
- Keystone Homebrew brought award-winning beers from outstanding homebrewers: Habenero Porter, Raspberry Tripel, Russian Imperial Stout, Hefeweizen, Robust Porter, IPA, Imperial IPA...keep up the great work folks!
- Iron Hill, unless I somehow missed them, was curiously missing
- Most commercial beers were middle of the road, not extraordinarily out of the mainstream, but good
- For example, DFH brought 60 Minute and Shelter...Victory had Prima, Hop Devil, and Whirlwind
- Two new ones to me that stuck out were the much talked about Steg 150 from The Lion and Kaiser Pils from Penn
- Yards Saison was very nice as usual
- Observed a temperamental cougar looking to start a fight...either we were keeping him up or he must've smelled the beer

- Two areas improved from last year: 1) Food was not limited to just one ticket/one sandwich per person; 2) Event covered more of the zoo property allowing for less congestion and viewing of more zoo animals.

- Two areas for improvement next year: 1) Make the water available throughout the grounds, not just under the big tent; 2) Make the event shorter or breweries bring more beer...most were shut down one hour before official closing time. 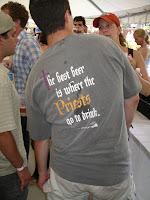 (T-shirts worn to beer events are the best, are they not?) 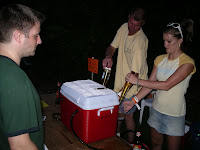 (The fine folks pouring Penn and its Kaiser Pils) 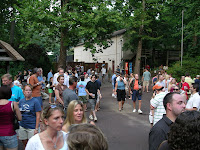 (The happy crowd mingling throughout the zoo property) 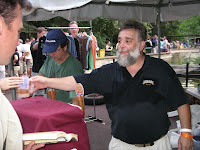 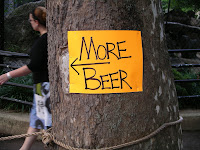 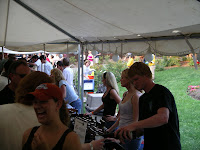 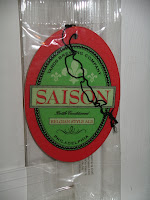 (Air is always fresher with Yards)

Okay, fair enough. The Weyerbacher table was a bit more exciting than some others. They had the Double Simcoe that so many people love and....wait for it....this year's Imperial Pumpkin, which should be hitting area shelves very soon. This was a big favorite last year too.

Thank you for reviewing the event. I was not able to be there this year and I wondered how it was.