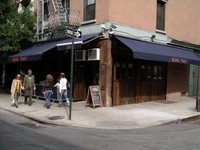 The health and well-being of the once endangered Blind Tiger species has been reported elsewhere over the past couple of months. I was finally able to witness in person the freeflowing taps at this Greenwich Village destination. (If you recall, the last time I was there, no beer was flowing as they were fighting the good fight through the New York red tape of licensing and legislation.) 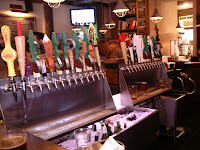 I stopped in for dinner on my way out of NYC after a business meeting last week. Needless to say, it was happy hour and the joint was packed to the walls. I was able to wiggle my way into a bar seat where I could keep an eye on all of the beautiful tap handles and bar top casks. The prior night they had hosted Dogfish Head and around 15 of their brews. They still had a couple of handfuls of the treasured DFH beers flowing. (The only one I hadn't seen before was Johnny Rawton Pils.) Along with Weyerbacher, Smuttynose, Brooklyn, Southampton, Six Point, Allagash, Magic Hat, Sly Fox, and Victory they've got the Northeast well-represented.

For dinner, I chose the Gazpacho and the Bacon, Mushroom, and Cheddar Quesadilla off the blackboard menu. The gazpacho was one of the chunkiest and creamiest I've probably ever had. But, geez was it good. It took me a minute to realize that what made it so creamy was the addition of avocado. Along with the ridiculous amount of tomato, garlic, and onion it was an appetizer I'd order again in a heartbeat. The quesadilla, which ate more like one of their pressed sandwiches, was perfect especially with the tasty addition of bacon. Hunger...satisfied. 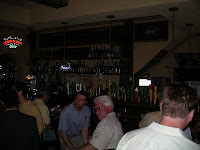 For thirst quenching, I started with Smuttynose Imperial Stout, moved on to Defiant IPA (cask), and finished with J.W. Lees (Calvados cask). How's that for covering styles? I'm not sure if the R.I.S. from Smuttynose is available in bottles, but I'd not seen it before. This brew has rightfully earned its place in their Big Beer Series. Fully of malty sweetness, mild roastiness, and some pleasant bitterness, the smoothness of the weight of the beer sliding across my palate reminded me that it's less than 5 months 'til Christmas! I've had Defiant before, just not sure which style and where. I'm thinking The Ginger Man perhaps. In any case, this hop wonder was awesome from the cask, making me wonder if they threw an extra handful of hops into it before closing it up. The Calvados cask of J.W. Lees was a necessary, albeit quick, final glass before I left to catch the Philly-bound train. So smooth, so apple-y, so woody. Trying this uncommon beer at the Blind Tiger made perfect sense and is further proof why the Blind Tiger should be on the top five list of beer joints in Manhattan for any well-travelled beer lover. Thirst, Taste...satisfied.

Last, but never least...for service, the lovely Kate was behind the bar taking care of the savages on the other side. She worked the crowd so effortlessly, taking care of friends and strangers alike, making sure no one went thirsty or hungry. Even with the demanding customers in her face, she made the effort to be pleasant and friendly. Her demeanor was cool and calm and made it a pleasure to sit at her bar.

Now, if you could all help with one last thing. Kate couldn't decide which picture she liked better. So, for our photo archives of those who make beer and those who pour it, let us know if like exhibit A or exhibit B better. Hm, should we make this an official poll question?! 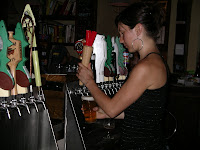 I like it when the staff is both competent (Exhibit B) and photogenic (Exhibit A) ;-)

Exhibit A for sure!