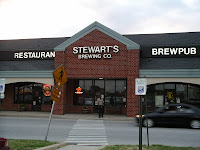 Stewart's is like a big fish in a little pond. When it comes to size, they don't make states much smaller than Delaware. While Stewart's may not be the first brewery in the first state, it certainly has carved out a nice little piece of brewpub real estate in the Bear, Delaware area. I'm not sure that I know another reason to head to Bear, but this was good enough for me. This visit was a long time in the making.

Finding Stewart's seemed easy at first. But, using the first hit on Google Maps as our destination turned out to be not such a great idea. We wound up somewhere a couple miles south of the actual brewpub. Maybe it's the site of the future headquarters! Perhaps I should have called first....moving along now....

So, we finally got straightened out and found ourselves wending our way through a massive strip mall parking lot. We saw a neon Budweiser sign and I figured Stewart's must actually be located next to another bar. Huh? Then I realized that Delaware must be one of the states where brewpubs can serve other commercial beer along side of their own. Can you tell that I don't do much of that consumption thing in Delaware?! 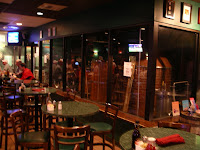 My experience with Stewart's prior to this first visit was limited to just that of festivals. Star-studded brews like Conundrum, McBride's, Stumblin' Monk, and Barleywine have left permanent memories on my taste buds. Finally, I decided it was time to make the almost hour-long trip down into Delaware to discover what else they've got going on at the brewpub.

We were struck immediately as we walked through the doors by the size and openness of the place. A large banquet-type room to the right, brewing operations almost straight-ahead, a large square bar area with lots of seating a bit to the left, and a fairly large dining room to the far left. All around are TVs tuned to various sporting events. In the dining room against the far wall, albeit a bit odd in my opinion, is a long shuffleboard table. They really seemed to have interests for all types covered here. 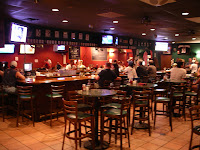 And that's exactly what was happening on this particular Saturday evening when we stopped in. Folks were eating dinner, watching the Phillies, drinking Budweiser, hooking up at the bar, having group outings, and of course drinking Stewart's. But, it definitely wasn't all about the beer. And that's fine I suppose. I think my expectations were built up a bit that with some of their creative and very well done brews that I've had off-premises, that a visit to the brewpub would surround me with a bunch of fellow better beer lovers. Don't get me wrong, they were there...but, the crowd on a whole was much more diverse than that. Maybe on other nights, it's a different crowd. I'll bet the crowd will be a whole lot different later this month when Stewart's is celebrating their 12th anniversary. 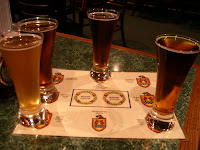 It appears that they always carry around a half dozen standard house brews, a couple of which are better than decent. The Irish Red and the Amber, in my opinion, were the highlights in the standard lineup. Both were just plain old well-made with flavorful grain profiles and just a bit of hops. Where Stewart's really shines, though, is in their specialty beers. And, although they were sold out (very disappointing) of the bottled version of take-home McBride's and weren't featuring any of the knockouts that I've had at festivals, there was a happy little run-in with a one-time brew called Hoppy Trails. Apparently, it went over very well with the beer geeks, because a call to the brewpub this past weekend indicated that it's gone and not to be heard from again. It was brewed as a parting shot by departing assistant brewer John and was an obvious tribute to the almighty hop as well! So good, I took a growler home too. 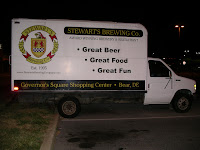 On the other side of the menu, the food shines well enough for a brewpub. Pub grub running the gamut from sandwiches, to salads, to pasta dishes, and to the typical appetizer lineup makes satisfying your other hunger easy as well. And, on the pocketbook? Not too bad, relatively speaking. Though, our tab could have been 20% lighter, had I remembered to present my AHA membership card, which was tucked away so nice and neatly in my wallet. Oh well...

As of now, it's looking like my next trip there will be some time during their anniversary weekend at the end of July. See you there too?

very underappriciated brewery.....and only miles from the "fertile crescent".......I am planning to attend the B-wine fest at the end of July.

That's great, Joe! We'll have to talk and see if we'll cross paths at Stewart's. Do you know yet when you'll be going?

Even better! That's exactly what I was thinking, too. We'll talk again when the time gets closer.

Anyone else for a Friday night run to Delaware?

oops, when I say Friday night, obviously I mean 7/27, not this coming Friday!