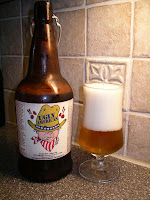 From where & how stored: Purchased from the brewery by Adam, who made a personal visit in March '07; stored at 48F since then

The Aroma:
- hops not so noticeable in the aroma
- sweet dubbel aroma; yeasty

The Taste:
- a bit slick like a triple IPA
- hop presence is subdued up front but catches you in the finish and lingers pleasantly
- pepper, clove, and orange citrus easy to detect
- drink on the cooler side, since the flavors and overall taste profile is cleaner and more enjoyable than at room temperature

The Aroma:
- sweet nose as it warms

The Taste:
- not severe but big
- not ugly
- round hops too
- bitter finish
- a little peppery alcohol
- slight grapefruit
- malt is there to support
- double er triple
- clean when cold

The Verdict: Ran out of beer to taste, note to self, don't share with Bryan next time ;-) I think this one deserves a second tasting. Lively and interesting, marketing makes you think it is a frankenstein of the the Belgian tripel and American Double IPA styles. It is truly something outside of those styles. This is what we need more of. You can tell Scott likes to experiment. I'm happy to taste the fruits of his labor.
Written by Adam at Saturday, July 28, 2007