Click Here For All Beer Event Reviews
(Chris introduces the 275th Anniversary Barleywine)
On September 1st, the building that houses the General Lafayette Inn and Brewery was given a 275th anniversary party by its current occupants. The caretaker, brewer Chris Leonard, and family have been running a brewpub business inside of it for the better part of the last decade. During this span, Chris and assistant brewer Russ Czajka have put out some of the area's most interesting and well-done beers. You may recall me saying in the past that it's a blessing for the General Lafayette to be in such a beer-rich region, but that they sometimes get undeservedly overlooked. But, those of you who are in the know will say that the General Lafayette's reputation is well earned and deserved. I'll bet it's about to grow even larger. 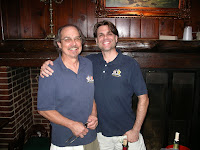 (Russ and Chris...who says this is hard work?!)
As part of this 275th anniversary event, the General's brew crew has put together an anniversary ale that is available as a take-home purchase. Outside of growlers, this is the first bottled product that will be available to take home for enjoyment months, and in this beer's case, even years later. Provided they continue to make more of their other products available in bottles, better beer lovers across the country will be able to enjoy the fine offerings from General Lafayette. 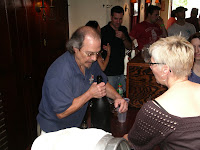 (Russ pouring the barleywine)
This barleywine weighs in at just a tick over 13 percent alcohol. It abounds with malted sweetness and alcohol which should set it up nicely to be laid down for many months, possibly years, to come. At $1 an ounce (the 22 ounce bottle costs $22), it's priced out there on the upper end for retail bottled beer. I picked up a couple of bottles due in part to my curiosity about this very limited (8 bbl) batch and also my confidence that this will turn out to be a very fine brew worthy of a special anniversary. 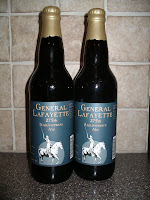 (The bottled Anniversary Barleywine)
In addition to debuting this new barleywine, Chris and company opened up the entire downstairs and back porch and rolled out the welcome mat for attendees with plenty of food and drink for all. There were multiple food stations serving everything from mussels to salad greens to meats and cheeses. An anniversary cake was served as dessert. 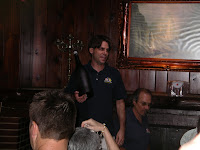 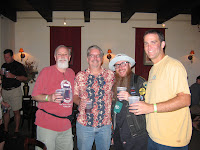 (Mark Haynie, Don Russell, Woody Chandler, me)
As a nice added touch to this historic event, Rich Wagner was set up outside performing a demonstration of what the brewing process likely looked like 275 years ago. With General Lafayette continuing to pull off events like this, chances are very good that they will be around for quite a while to come. 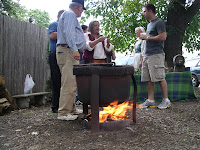 (Rich Wagner demonstrating the use of fresh hops) 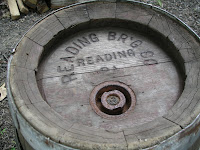 Sorry I missed the demonstration :-( Thanks for taking notes though.