First Visit to (the new) Dock Street in Philadelphia, PA 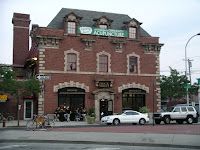 What's old is new again! I'm happy to report that Dock Street is opened, alive and well. Though, I certainly won't get points for being the first to report this. The anticipation was high (rightfully so) for the second coming of Dock Street and its fans having been beating a regular path to its front door. By the way, they are still closed on Sundays, while the 4pm-11pm original hours have been expanded to 11am-11pm Monday through Saturday.

While many have come from the east, heading west through University City, I chose to come in through the back door. Coming from the Philadelphia Airport (up Island Ave. to Woodland Ave. to Baltimore Ave.), I got an eyeful and earful of neighborhoods that Philadelphia seems to have long ago forgot. It's been a while since I've been in areas that depressed and it was a good reminder that even the most advanced nations still have problems with poverty that need to be addressed. That's where I will stop this little diatribe.

It is a good way, though, to contrast the area around 50th and Baltimore, where the new Dock Street resides. Riding through the West and Southwest Philly neighborhoods from the airport makes the new Dock Street environs look like a veritable paradise! Though, just a few blocks in any direction will quickly change that. 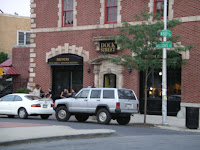 The converted firehouse that Dock Street is housed in sits nicely angled just off the intersection 50th and Baltimore. Across the island in the middle of the intersection is a children's park, which adds a nice neighborhood feel to the area. Around the side of Dock Street is a coffee shop and a bicycle shop, further adding to the positive atmosphere that this transitional neighborhood is trying to build.

So, finally, inside we go. As reported elsewhere, the space is not large but certainly efficient. The bar extends across most of the utilitarian-designed room and faces the open-air kitchen area. The bar area also provides a view into the two-level brewing operations through large windows. 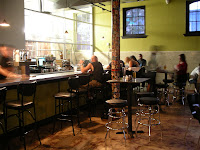 And, pizzas, boy oh boy, amazing pizzas do they make! I didn't bring a copy of the menu home with me, but trust me when I say that creative pizzas are the focal point of the menu. The one I opted for was a Pear, Gorgonzola, and Brie (I think that was the combination). That particular evening, they were substituting fig for pear and it was just as delicious, maybe more so than I would have imagined.

Also, soon to be on the menu will be the legendary Trio Fries. Folks, if you've not had the pleasure before (Victory's are very good, but alas do not count) then you need to make sure you order these at the next opportunity you get. The concept is simple...seasoned potato fries, sweet potato fries, and dried leeks and is a wonderful call back to the early days of Dock Street. The perfect beer snack food? Quite possibly! 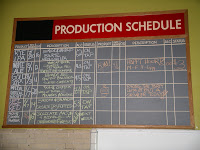 As many of you know, the first batches of Dock Street Beer were crafted by free agent Scott Morrison, formerly of McKenzie Brew House. He has put together a solid lineup of Rye IPA, Oatmeal Stout, Golden Blonde, Wheat, and Red. Here's a quick rundown...The rye was subtle in the IPA as the hops stole the show. The stout was layered with rich sweetness. I skipped the golden and the wheat, but will make a point of trying them next time. The red was, I think, a red though I had some difficulty with all of the cascade getting in the way. Good thing? Bad thing? That's an individual call. But, it certainly is a decent beer with a boo-yah hop punch. Got me thinking about the cascade hops growing in the backyard! Time to make the beer. 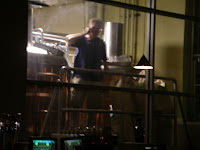 Since Scott left his temporary gig in the Dock Street brewhouse, Julius Hummer has come in to man the mash paddle. He has an interesting lineage to Boulder Brewing in Colorado (his father was co-founder) and sounds anxious to set down roots in the Philly brewing scene. I was disappointed to miss his Sour Cherry Porter by only a couple of days. The cherries are something I've been considering for an imperial stout recipe. Once again, thinking homebrew! 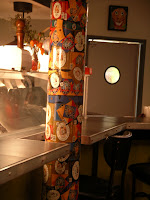 What else can I tell you about the new Dock Street? Oh, right. There is some seating available outside at a few tables set up on the front sidewalk. Rosemarie, Renata, Julius, and the rest of the crew are off to a great start and seem destined to help breathe some much needed life into the neighborhoods just west of University City in Philadelphia.

Looking forward to visiting myself. My first Philly beer was the Dockstreet Pumpkin something or other. Wow...time flies.

The red is Julius's first beer, not one of Scott's. Its name is Left Coast Red, which is a pretty good clue.

Good point, Jack! It was even pointed out to me during my visit. You'd think I'd pay attention, maybe? Or at least read your review more closely ;-)