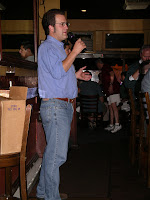 (Rob gets things rolling with the first course)
You've gotta get up pretty early to get ahead of Lew. Today was no exception. Before the early hour of 0700 hours, Lew had already put up a review of Tuesday night's Allagash dinner at Monk's Cafe in Philadelphia. And this from a guy who showed up nearly half way into the evening's festivities. This guy's amazing, I've got a lot of learning to do!

As Lew commented, my wife Patty and I attended this dinner on our 9th wedding anniversary. Oh, and by the way, the tzatziki was a nice touch with the first course, seeing as how our honeymoon was in Greece!

What have done right, I ask? First, a trip to the Eagles season opener in Green Bay the weekend before our anniversary, then a beer dinner on the night of our anniversary. Many thanks to Tom, Mark, Lew, Matt, and the many others that wished us well and bestowed upon us the tasty gifts of Malheur Brut and Gouden Carolus D'Or 2004. Hm, I'll need to let these guys know the date of my upcoming birthday. 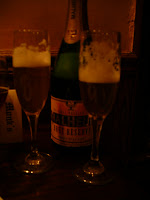 (a rather dim flashless photo of the Malheur wedding anniversary toast)
So, with the quite-to-point and amazingly accurate review given his arrival time (hey, the guy's good, like I said), I will cede my usual rapacious longing for loquaciousness and state simply some tidbits from Rob Tod. (If I'm not going to write much, I might as well roll out my fifty cent words, right?!) 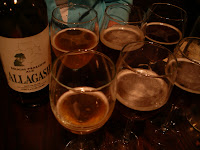 (Triple, Interlude, Curiuex)
And, of course, as usual here follows a transcript of the event's food and beer pairing:

1st Course
Allagash White (when the White is the session beer, you know you're in for a big night!)
- Amuse Buche; hummus/lamb with tzatziki/grilled chicken 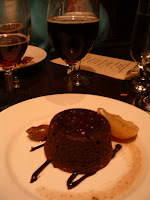 (would a Brew Lounge review of a Monk's dinner be complete without a dessert photo?!)

I thought the food was very good as expected and the beers paired well for the most part. Although there was not anything that blew me away beer wise as they are all pretty well available in our area, having them all at once was a nice treat. Refills weren't too shabby either!