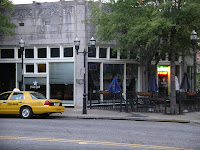 Though I'm taxing my memory, the last time I was here I believe that it was called Mill Brewing. Now it's called 5 Points Grill. Instead of making their own beer, they're serving some fairly decent beer. It seems that they're in a bit of transition, trying to figure what to do next.

According to the bartender, there may be some interest from Sweetwater in Georgia to come over and have some type of brewing arrangement with 5 Points. After all, there's a full brewing operation locked up in the back of the restaurant, just waiting to be used. Not sure, though, how much credence to give to those comments. I'll need to ask someone in the know. Though, it may explain the full lineup of Sweetwater brews on tap.

I was disappointed not to be able to try the Lazy Magnolia Southern Pecan Nut Brown Ale, which had kicked a couple of days before I arrived. Apparently, it's on tap somewhat regularly (along with other Lazy Magnolia beers from Mississippi) and is a crowd pleaser. The home of Lazy Magnolia just happens to be the home of another local standout, an NFL quarterback that you may be familiar to you. 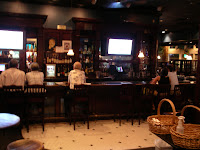 Since I was there on a Wednesday late evening before closing, it was tough to judge what type of business they're doing now. The outside tables were mostly filled and a handful of customers were inside at tables and at the bar. It definitely seems like the kind of place that feeds off of "location" and the outdoor seating too. The large windows overlooking the five points intersection add to the indoor atmosphere as well.

When I had been there a few years ago, the joint was packed the two times I was there on Thursday evenings. And, if I recall correctly there had been a band playing the one time as well.

I guess I should apologize for this somewhat atypical review. It's sort of short on information. But, maybe the one takeaway for you here is that, once again, if you're in the Five Points area of Birmingham and looking for a good brew, the 5 Points Grill may not be your first choice. But, it's not a bad one either.

Here's a quick rundown of what was on tap earlier in September during my visit.
Sweetwater (420, Blue, Hummer, Sweet Georgia Brown, IPA); Rogue Brutal Bitter

The Five Points Grill is in transition. The ownership has changed and a full renovation is under way. Even the menu will be upgraded. All new seating inside, and an entirely new patio outside. The brewery is going to be open and brewing beer within the next couple of months. It will not be Sweetwater. An experienced brewmaster has come in and taken over the brewery. Exciting things are happening and it will be very different by November.

Thanks for the insight. That should bode well for my visits to the Magic City next year!

I don’t’ get to Birmingham very often, but I’ll try to stop by the next time I am. It is a shame you didn’t get any of the Lazy Magnolia. It really is an outstanding beer.