Michael Jackson Toast at The Drafting Room in Exton, PA 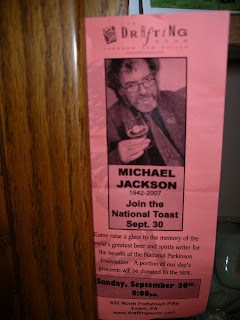 I was honored to fill in tonight for the traveling Patrick Mullin at The Drafting Room to supply a toast to the work of Michael Jackson. The added twist was that I needed to fit the toast into the length of a commercial break during the Eagles/Giants game. Not that anyone told me to do that or that anyone in attendance would have really cared, but I figured that a 60 second toast was about right. So, we did it at the first quarter break. (In hindsight, the camera was in my pocket and never came out. So, unfortunately, there are no still pictures or video.)

The Drafting Room raised money for the Parkinson Foundation by putting out the pot for cash contributions and donated a portion of the day's sales. They also did a raffle for a mixed beer bottle basket, a Lindemans gift basket, and a Tröegs Mad Elf jeroboam bottle.

At the peak around 9pm, there were close to 40 people in attendance. My worst fear was that there would be a room full of people interested only in the Eagles game and a few beer folk at the bar. But, then again, this is The Drafting Room and, as such, during the toast I saw many head nods and hearty "cheers", "prosits", and "here-heres".

All in all, a successful night as far as I could tell at The Drafting Room. I'll be interested to hear from others and their experiences in toasting the Man who has played a large role in getting this industry to the point where it is today. It's up to all of us now to carry it on. Godspeed Michael!
Written by Bryan Kolesar at Sunday, September 30, 2007

:-) The crowd had this quiet energy about them. At the moment of the toast it felt like a million pub folk quietly clinking their glasses and offering their own words to Michael.

I reflected for a moment on the thought of all the other people in the world doing the same. I though what a great man Michael Jackson must have been to deserve such a toast.

Thanks for standing in, Bryan. We raised a good chunk of change for a very worthy cause.

Unfortunately, I could not find a single bar in the Santa Barbara area participating. We held a private little toast at Carr Winery at 6:00pm with their just released '05 Cabernet Franc. I hope Michael would have approved.