Getting Started in Homebrewing - Bottling Day

Click here for an index of Getting Started in Homebrewing
I think that it is safe to say that if I was not already sick of sanitation, by the time I reached the end of the bottling stage, I had certainly had enough of it. I was already looking forward to my next batch of homebrew, because I swore never to use bleach again for sanitation. I am looking forward to how much easier I perceive the sanitation aspect to be next time using something like Iodophor. Actually, this is something that made its way quickly to the top of my 'lessons learned' list here in my first homebrew experience....don't ever use bleach again! It's not worth, in my opinion, the aggravation.

Let's take it from the top. I arrived home from work determined to bottle since I was pretty comfortable that whatever wackiness occurred in the secondary had subsided (it had been 4-5 days since the last of the bubbling). Henceforth began the sanitation. The bottling bucket, the siphon, the bottling wand, the spoon, and my hands...ok, well, not really. Emptied the dishwasher, loaded it up with 2 cases of empty, pre-cleaned, and de-labeled bottles, and ran it on the heavy duty, hot cycle with heated dry. Oh yeah, and threw the caps into the sanitizing solution too. How happy was I that I take the time to rinse out bottles immediately after drinking the beer from them? It certainly made the cleaning/sanitizing of them much easier on bottling day. 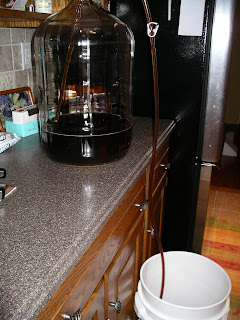 Okay, with the sanitation thing out of the way (yeah, yeah, I know just how very important it is...still doesn't mean I have to like it!), I got started on moving the beer off of the sediment in the carboy and into the bottling bucket. That was after securely attaching the spigot, of course. I had the carboy set on top of the kitchen counter with the bottling bucket on the floor. Actually, it was on top of an old blanket which would protect the floor from spills, splashes, leaks, and other misfires. 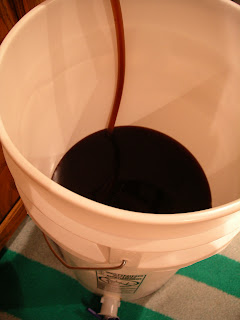 I got the siphon action going in the same way as moving into the secondary, by filling the tube with water first, then submerging the racking cane below the beer level, then opening the siphon tube to allow the natural flow. The process of moving the beer didn't take more than 5-10 minutes or so. I got just about all of the liquid out. Some stayed behind with the sediment, but not enough to cry over. 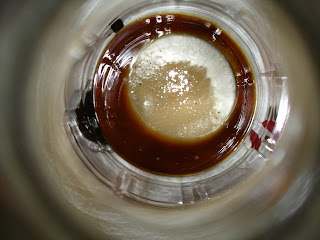 With the beer in the bottling bucket, I first took a little over a cup of beer out of the spigot. A tiny portion was used for the final gravity reading (1.012, by the way...seemed about right), a cup was boiled with the priming sugar, and the remainder was tasted.

At this point, the bottling could commence. I sat on a stool below the bucket and had the prepared empty 12-ounce bottles next to me. Each bottled was filled by inserting the bottling wand into the bottle, touching the bottom to release the beer. I was able to fill the bottle to the top, because when the wand is removed the level goes down to approximately halfway on the neck, just perfect. Too much head space leaves too much room for oxygen to spoil the beer and too little head space leaves not enough room for the bottle conditioning and the carbon dioxide that's created as a result.

Filling one bottle at a time, then placing it on the counter with a cap perched on top, I had 41 bottles filled in less than 30 minutes. With all of the bottles lined up like rows of soldiers on the countertop, it was easy to pick one off at a time and use the capper to secure the bottlecap.

Each bottle was placed into an empty cardboard case of beer, which was then closed up and placed in the coolest place in the house, around 65F-72F. They sat there for about a week until I decided to crack one open to see how the bottle conditioning process was coming along.

p.s. No pictures of the bottling process since I was going at this alone and bottling is kinda a two-handed project.

You need a head cam so you can take pictures while you are bottling.

Keep on truckin'. You know the law permits you to brew up to 200 gallons of home brew per year. You only have 195 gallons to go.

Hopefully you also wiped each bottle down after capping. This keeps the bottle exteriors from getting sticky and growing things.

Sure did. I first gave them a little tug to make sure each was secured properly. Then, gave them a quick once over with a rag....though, I hadn't noticed anything creeping out during the capping, but like you said, you can't be too careful.