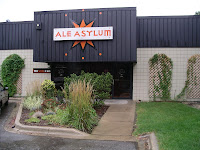 I think that I'm a fairly good judge of character and quality. Of course, this can all be in the eye of the beholder, but at least in this case I believe that I'm on pretty solid ground.

Solid character and high quality are not always easy to detect within such a short period of time. But, at Ale Asylum in Madison, Wisconsin, it took mere minutes for me to discover that this relatively new brewery has both nailed down pretty well. 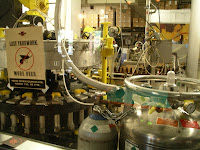 While the trip to Wisconsin did not get us the Eagles victory that we were looking for in Green Bay, the last 90 minutes of the trip in Madison almost made up for it. Our friend, Mark, took us to Ale Asylum for a quick libation (or 10) before dropping us at the airport to catch our flight home. We got so much more than that. 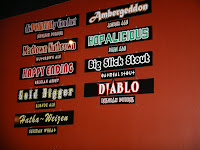 Ale Asylum was started in July 2006 after the brewing crew from Angelic Brewery in downtown Madison left to setup their own shop. They headed east on their way out of town and chose a location in an industrial park on the other side of the city's airport. When Mark described Ale Asylum and its location to me, I was expecting something along the lines of the former Heavyweight in New Jersey...or Weyerbacher in Easton...or East End in Pittsburgh...or any other brewery in a low-rent industrial neighborhood. 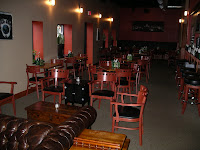 From the entrance, I almost believed it. After turning the corner at the front door and seeing the bar area, I thought that for a brewery these guys had a pretty nice front end, nicer than I expected. And, a healthy variety of styles on draft....and merchandise....and six packs to go....and a "basic needs" food menu. Not too shabby, I thought. Then, turning the corner again, I found a couple handfuls of dining tables....and comfy leather couches....and a right fine billiards table....and large windows looking into the brewing operations. Wow, I could hang out here all afternoon! (and night?) 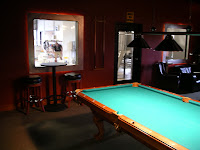 After poking our noses around, we quickly ordered up a few sets of samples (a healthy 5 ounces, or so, per sample). Another nice touch from the bar are the trays that hold the samples. A nice wooden tray with decorative carrying handles holds 5 glasses with a spot to display the description card for each style. 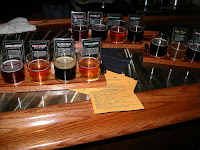 So, how about those styles anyway? I had a chance to sample every style and can flat out say that these guys are doing them all quite well. For those of you who know these folks, you're probably not surprised...seeing also how they have won a combined 21 medals (5 gold, 7 silver, 9 bronze) at the GABF and WBC competitions over the years.

I was blown away by the Hopalicious (very hop friendly, but somehow not aggressive), the Big Slick (nice roasty, tasty stout), and the Happy Ending (uh, who wouldn't be?!). But, also done very well were the Mad Town, Diablo, Disporterly, and Gold Digger. And, just when I thought I would get out of there without trying the Hatha-Weizen (nice German style) or the Ambergeddon (hop forward amber), I had two more small samples shoved under my nose while a six-pack of the Amber was being gathered up for me as a last minute addition to my checked baggage. Unfortunately, they were a day away from having more bottled Hopalicious...Mark, please send a keg! 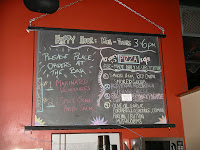 While we sipped on our samples, we played some pool and watched the brewing activity. If we had been hungry, the limited but well-chosen menu would have satisfied us with the likes of pizzas and salads. Like I said before, this is definitely a comfortable place that I could see whiling away many hours. On our next trip to Madison, we'll be sure to visit them before the last hours of our trip.

I'm glad you had someone to take you to a definite jewel here in Madison. I think it is underrated here, however. It was voted third best microbrew in town even though it is the only actual microbrew in town. (#1 = Great Dane - a brew pub, #2 = Capital - a regional brewer). For those of you wondering www.madisonbeerreview.com/2007/08/craft-beer.html and some other posts on there helps decipher the difference. Or at least it did for me.

Anyway, I am happy that you made it there. Good luck getting your keg of Hopalicious!

I have tried some really great beers from all over the world and to date, hands down, Hopalicious is far my favorite. I look forward to visiting my son in Madison, as he always has several 6 packs of Hopalicious waiting for me and its good to see him to. I would hope that it catches on and I can find it in Iowa soon.
steve