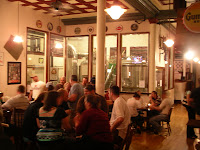 The perfect thing about the party at Union Barrel Works this past Friday evening was that it, well, wasn't too planned. Sure, there was the usual suspects on draft and food coming out of the kitchen. But, really, there was a live band playing...a really good live band...and that's about it. 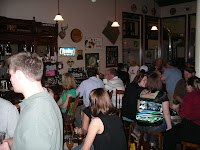 And I believe that's what made the night. Same food and beers (okay, with a couple of more recent additions) that have been around since day one, same prices, a bit of live music, no cover charge, no giveaways, no "special" anniversary beer. Just show up and have a good time. And that's exactly what everyone did. Including Tom and Amy Rupp, the owners. The crowd filled the room, the lagers were flowing, and gemuchlicheit was in full effect. 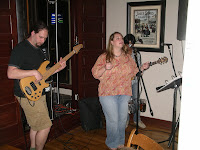 When we arrived just before 9pm, they were finishing up in the dining room and moving to the front bar with all of the action. By 9:30pm, the joint was jumping with the music of Boyertown's Vuja De (not a typo) and a house full of party people. With business as usual on cruise control, it was obvious that Tom and Amy could completely enjoy the evening that celebrated the first year of very successful brewpub business in Reamstown, PA. If Vuja De sounds appealing from their sound over at their MySpace page, go check them out in person. They'll be back at UBW again in May. And, here's a tip for you. If they don't play Janis Joplin's "Me and Bobby McGee", be sure to ask for it. It's one of the highlights of their sets and the lead's voice will pull you right in. 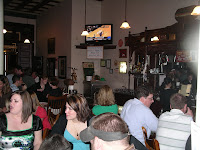 The second year promises more beer dinners, rotating cask conditioned beer, and a possible expansion into the upper floor(s). Congratulations to the Rupps on their first year of success at Union Barrel Works. 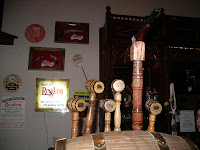 So that's what the back of my head looks like. Huh.

'Twas a good time Friday night. We got there early for some dinner at the bar while watching the start of another Phillies' loss, and many pints later I tacked home - everyone should have a place like this within walking distance.