Hop Shoots; It's What's for Dinner

As if growing hops in the backyard was not adventure enough, Mr. Homebrew Chef Sean Paxton had to go and tease me about what their young shoots might taste like. You may recall that I made some envious comments about a beer breakfast/lunch/dinner extravaganza (!) that the Toronado hosted last month with Paxton as the mastermind in the kitchen. He paired up something like 11 courses of food with close to 20 beers. I was so intrigued by the idea of taking the hop shoots that would ordinarily make it into either the trash or the compost pile after being pruned in the springtime and putting them to good use that I decided to give it a whirl. Just another attempt at further completing the sustainable lifestyle, eh? 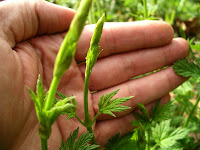 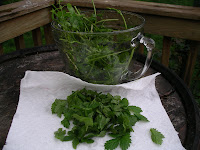 (sampling the growth)
(picked, cleaned, carefully selected)
When I looked at the plants last weekend, I knew the time was ripe. They take off so fast each spring, that to harvest the tender, young hop shoots for cooking takes a good practice in timing. Otherwise, they begin to take on the tough, fibrous-y texture (in a way like really, really tough asparagus). The idea is to take very early growth when they are less than 12 inches high. If there are underground or near surface roots (I suppose they are considered part of the root structure, though I don't know for sure), they are white colored from their lack of exposure to light (creates chlorophyll) and can be used as well. Sean pointed out that a Belgian dinner that he had in Belgium (notice my proper use of Belgian vs. Belgium ;-) used the colorless hop shoots/roots. 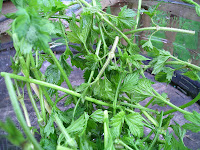 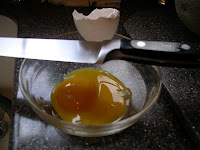 (closeup of the candidates)
(egg yolks and beer measuring cup)
I won't write about exactly how I made the dish. For one thing, it's Sean's recipe to write which he will do in time and post on his website. I'll link to it at that point. But, he did give me a couple pages worth of valuable detailed notes of how he prepared them. All went well as I harvested around 30-40 pieces to use from two different rhizomes. Adam posted a picture of what the one had become. Quite the unwieldy, shall we say, hop bush. After soaking them in ice water for an hour or so, I rinsed them, one by one, under water and tested their toughness. Near the bottom where I made the cut, I tried snapping the shoot to see if it would break cleanly or if it was to fibrous-y (is there another word for "fibrous-y"...I'll need to check). If it broke cleanly, I next checked for any stringy-ness (another great word!) and peeled away strings like you would do with celery to make it less chewy and dental floss-y (now I've gone too far). 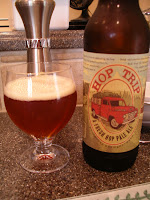 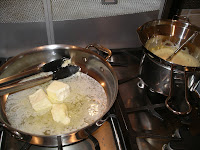 (accompanying beer of choice)
(the hollandaise sauce and way too much butter)
With a hand-selected bunch of about 25 or so hop shoots, they were ready to go. I needed to make a hollandaise-like sauce to accompany the cooked hop shoots. Sean recommended using half the egg shell for measuring the beer to be mixed with egg yolk. Probably the first time I ever used an eggshell as a measuring device. The cooking of the hop shoots was so simple and involved only butter, beer, salt, and pepper. I saved this step for last. 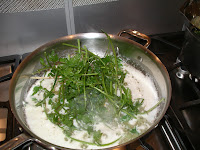 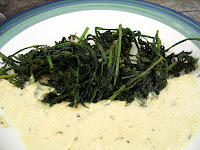 (cooking the shoots down)
(final product)
The end result? I rang up Adam and he had no problem obliging my request to join me in a sampling. And, of course, it didn't hurt that I was serving up the Deschutes Hop Trip (fresh hop beer, what else?) that I had used in the making of the dish. Heheh, uh, well, uh, let's see...I believe I was a bit off in the approximation of butter to use. Now, I know they say butter can make anything good (just like bacon, or anything deep-fried oil......) but, yikes, this was a bit crazy. However, once our palates could rid themselves of the salty butter (and, my "dash" of thyme might have been a bit fat-fingered!), we could taste the earthy, green vegetable taste of the hops. They were a bright green color and I think that Adam was on to something when he compared the taste to fresh-picked green beans. There was also a bit of a (surprisingly not so unpleasant) light crispness from their time spent in the saute pan, perhaps a bit too long. The sauce on the side added a very nice creamy complement. Unfortunately, with the butter drenching that they had taken, they didn't need much more of a creamy complement.

I'm really looking forward to trying this again. I realize a couple of things that could be adjusted on my side. Plus, I realize that Sean was cooking for a roomful of people and placing just a few on each plate. My intention was to just cook them up, mound them on a plate with some side sauce, and see how it worked. It worked, not perfectly, but like the beauty of brewing that's why we try and try again.
Written by Bryan Kolesar at Friday, April 25, 2008

Email ThisBlogThis!Share to TwitterShare to FacebookShare to Pinterest
Categories: Beer and Food