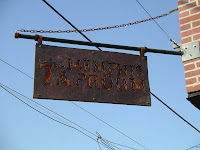 The past week at the newly-minted Memphis Taproom in "Port Fishington" has seen quite the throughput of beer fans, writers, industry folk, and assorted other comers-by. I was in Dallas while opening night on Tuesday April 22nd was going down. According to Spanky, approximately 500 of the curious type to be exact. I can guarantee without being there that the scene at Memphis Taproom was 10x better than the beer scene in the entirety of the State that is Texas. More on that, though not much more as you could expect, later this week.

So, with that disappointment I arrived back into the Philly airport right around rush hour on Thursday evening. What's a beer guy such as myself to do when arriving into Philly at rush hour? Sit in traffic attempting to make it out to the western suburbs? Or, drive a few miles north (against traffic) into the fringes of north Philly? A quick stop off at Yards to check out their progress (pictures in a separate post) and then just a few minutes further north to Memphis Taproom (jump here for the map). 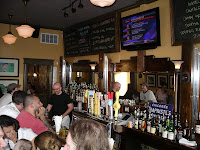 In a single word (you bet I can!): WOW! Brendan (aka Spanky) and crew at Memphis Taproom are continuing to reinforce one of Philly's strongest arguments for best beer city (where have we heard that before?) That is, some of the best beer bars and brew pubs can be found in the most unlikely of neighborhoods. See Dock Street, South Philly Tap Room, Grey Lodge, Johnny Brenda's, and so on. 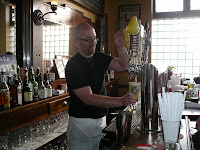 I'll have more to say after Patty and I stop by there in the next couple of weeks for a full dinner experience. For the time being, I'll leave with you some easy advice. First, apply the same safe practice that you would anywhere, especially in the city. Leave nothing obvious sitting visible in your car to anyone passing by. It's not a dangerous neighborhood, but you want to be safe and practice common sense.

Inside, you'll be treated to reasonably priced food and beer. 10 beer taps and a coming-soon cask beer engine. And if the Black Bavarian is still on tap, go for it...it's really that good! A real down-to-earth excellent neighborhood beer bar without pretension. A flat screen TV behind the bar (muted) if you're into the local sports scene. 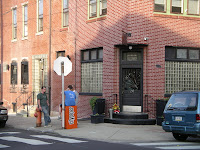 I can't wait to return. TheRealBeerFly has already returned. Game on, folks! 35 miles away, Ron's in Exton is up next. Different scene, same great beer! As always, more to come...
Written by Bryan Kolesar at Sunday, April 27, 2008

I don't know if I wish I had a neighborhood bar like this in walking distance from my house or if I lived in a neighborhood that so enthusiastically embraced it. I was by there on Wed. afternoon and the neighbors were wandering in just to check the place out.

I second the Black Bavarian. I would also try the Poppernge(?) Hommel if he hasn't run out yet (at last count he was on keg #5.)

I volunteer to be one of your dining companions when you return. food rocks....www.beerlass.com