On my way to check out Ortino's Friday frivolity and I got sidetracked by a little late-Friday curve ball at work and rush hour madness around Phoenixville. Now I'm set back an hour, and there's no way I can justify the drive to Zieglerville to spend, like, only 15 minutes on beers like Tiny Pliny, Perkuno Metata, Stone's Throw, and Dirty Ol'.

I guess my frustration got the better of me, because I drove right on by Sly Fox and Iron Hill in Phoenixville when I decided that I was bagging the Ortino's trip and heading home. I'm counting on some of these fine brews to still be available tomorrow and perhaps I can make me a Sunday afternoon diversion.

But, in the meantime, I'd found those aforementioned ironies in the form of two smaller beers at Exton Beverage and The Drafting Room. Patrick Mullin (fka The Drafting Room's beer guy) paired up with EB's Greg Ramirez on this splendid Friday afternoon and was pouring and spreading the good word of Sierra Nevada. The Pale Ale was flowing, of course, but the Summerfest also made appearance fresh from the bottling line. I liked the Summerfest Lager so much (even better than the Pale Ale...must have been the almost-unseasonably warm weather) that I bought a case of it...$29.99...this message was brought to you by the fine folks at Exton Beverage and Sierra Nevada! 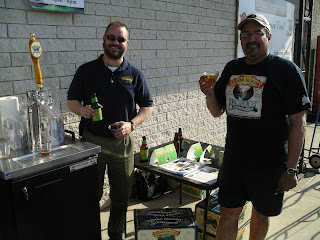 (would you prefer a better lit picture?)
Seriously, though, at 5% ABV, it's just pushing its sessionability but in an oh-so-refreshing way. The advertised 32 IBUs are just enough to get your attention with the soft finesse of the Saaz hops. Such a good drinker that it became my lawnmower/hockey/lawnmower beer today. They've been doing this beer for quite a few years, but this, to the best of my recollection, is my first taste of it. The bar's been set for my favorite new summer beer of 2008.

Speaking of The Drafting Room, it'd been at least a few weeks since I'd stopped in (and thanks to Heather for making special notice of my absence). In the spirit of supplying an updated tap list to all of you fine folks and, uh, rehydrating in the couple of miles that it'd been since I left Exton Beverage, I stopped in to find another close-to-session beer in Lakefront's White. Just a 10-ouncer, though if I had known I was canceling my trip north, I'd have gone for a second or at least a full pint. A real nice crisp and to-the-point Belgian wit-style. Though just a bit thin, it helped to accentuate the tart flavors and make it an easy, refreshing drinker.

So, in the end, no big beers for me. Just a couple of real pleasant finds before we were off to Union Barrel Works' 1st Anniversary Party in Reamstown, PA. More on that later.
Written by Bryan Kolesar at Saturday, April 19, 2008

All the beers were in fine shape and quite a gathering. I started Friday stopping in at Sly Fox with couple of no good beer drinkers sitting outside even though the patio wasn't open (I won't name name but one guy was pushing some beer magazines and the other guy I have seen a few times at Victory.) Went off to the northside of Z-Ville and waited until nearly 7 PM but there was no sign of Mr. Dan. However, there was a good crew of beer drinkers there and many a pleasant conversation was had.

Oh and I almost forgot someone asked if I were you. It maybe time you started running some more and maybe take some handsome pills because I am not someone you should be confused with.

Yeah, Mr. Dan was having a rough afternoon. I didn't get there till 7:30 and then it was Hammer time! Which is about how I felt when 1 am came around. And Kevin, no matter what that one guy from Victory says, he is really Linus waiting for the great pumpkin in the parking lot.

Aren't Greg and Patrick the shit? So cool both of them. I hung out with them at the Sierra Nevada booth during the end of the night session at the Philly Craft beer fest..and the after party!