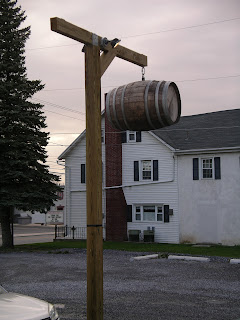 Fastest Beer Dinner Ever? Perhaps. 7 courses of food and beer in less than 2 hours sure sounds fast. (Contrast this with a 6 hour marathon 11-course/18-beer brunch at Toronado last weekend...more on that later...you'll see what I mean). But, how the crew at Union Barrel Works suffered for speed during their fifth beer dinner in the first year of operations, they made up for in quality.

Plentiful chunks of tender lamb meat in the stew had me begging for more. A creative and tasty take on the shepherd's pie had me not missing the traditional mashed potatoes so much. The sorbet (strawberry and pilsner this time) was a pleasant intermezzo as always. The salmon with potatoes was done nicely and accompanied surprisingly well by sliced apples. And for dessert? Why, of course, chocolate cake and stout. Very nice. And, I'd be remiss in not mentioning the appearance of one of my favorite vegetables, rhubarb. Though, allow me the chance to nitpick and say that I would have loved it with a scoop of vanilla ice cream. 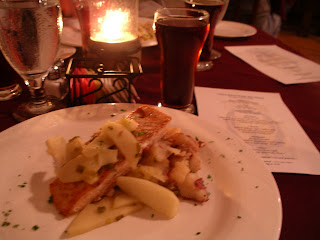 Seven courses all paired with a unique UBW beer. Two were new to me during this visit. The Dubbel Union and the Pilsner are new to the lineup as is the Pale Ale on handpump and a name change to the Octoberfest (Uncle Fester). 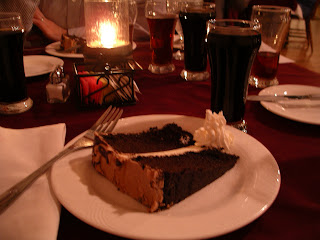 One last note on Union Barrel Works here, if I may, as they approach their one year anniversary. If you haven't checked them out yet, next Friday (4/18) could be a good time to do so. They'll be celebrating with a One Year Anniversary Party. No cover charge, no package deals, nothing special other than Tom's wonderful beers on tap and live music beginning at 9pm.

If you want a table for dinner, keep in mind that without reservations on a Friday or Saturday night, you'll often find yourself on a waiting list. In Tom's words, the first year results have exceeded expectations and they're looking forward to a second year of growth in Lancaster County.