So many different ways this little piece of writing is going, I'm not sure where to start. Let's start with a rousing and convincing win today to bring the Philadelphia Flyers back to even with the Washington Capitals in the first round of the NHL playoffs. Now let's face it. I love baseball, but it's still hockey season. Best yet, it's playoff hockey season: the second season. And, there's not much better.

Except maybe for watching playoff hockey with good beer. Going to the Wachovia Center where the Flyers home ice is won't provide much in the way of decent beer for its fans. Fact is, this year I've rarely drank beer at the games I've been to. 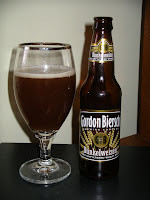 Good thing I was at home today enjoying, among others, a Gordon Biersch Dunkelweizen. A nice little hospitality package showed up a couple of weeks ago and I've enjoyed several, and provided some to others, since then. In fact, it's become Mrs. BrewLounge's favorite new beer of the year, thusfar.

Comps, conflicts of interest, and the like have been a topic of heated debate lately. I've provided my own two cents in my latest "profile update" over to the right side of the page here if you're so inclined. I've got another two cents on the topic that I'll share somewhere down the road.

Back to the beer at hand. I've always been a fan of Gordon Biersch beer. All the talk over the past year or so about session beers, lagers, and non-"extreme" beers reminds me of GB, in a good way, every time I run across them. In D.C., Atlanta, California, or any of the dozen or so states that they're located, one can find a very good lager-style beer. I had a nice run-in with a few of their "friends" at the Embarcadero location in San Francisco a couple of years ago.

Trust me, I too hope that I find some way out of this tangled mess that I'm weaving here. I still need to complete our tax returns tonight. (Oh, what the heck, there's always tomorrow night!)

In some ways, GB reminds me of a very large Triumph (of NJ and PA). They do lagers very well. In fact, the GB family has, by my count, brought home 16 GABF or WBC medals over the past 10 years.

Now, they've gone and bottled the Dunkelweizen for the first time. (Oh by the way, keep in mind that the restaurant/brewpub group is managed separately from the brewing company that makes these bottled beers.) My bottles are dated 3/21/08, so this is virtually as fresh as it can get, especially for being west coast brewed and delivered across country.

This LA County Fair gold medal winner pours smoothly as a dark brown, a very murky brown, beer with a modest head that laces the glass a bit. The aroma and the prominent flavor match up and leave no doubt: yeast-driven banana. Faint spice notes and bit of bubblegum flavor (I stole that from their press release, but agree wholeheartedly...honestly!) Unfiltered, as the label says, for sure. But, don't be afraid, there are no chunks. Actually, after a relatively careful pour, only a ring of sediment is left in the bottom of the bottle. No ABV is listed, but it drinks like something not more than 6%.

Unfortunately, we won't be seeing bottles of this in Pennsylvania in the near future. Bottle distribution is initially in a handful of western states (CA, NV, AZ, HI) at retail stores and select airport locations (mental note for next flight through SFO.) But, national distribution of this and other GB bottled products is reported to be on the horizon in 2008, so stay tuned. Be on the lookout for this wherever you may travel. This is one good drinker.

Last bit of news. Dan Gordon will be the guest interview on The Brewing Network's Sunday Session tonight in, oh, about 60 minutes. It's been a while since he's been interviewed. If you've never heard him, do yourself a favor and tune in tonight or download the podcast version tomorrow. There we go, I think I've now got all my plugs in.

In the meantime, I'll be content with D.C. having their Gordon Biersch brewpub. We'll take the next round of the playoffs, thank you ;-)
Written by Bryan Kolesar at Sunday, April 13, 2008

It seems like our minds are in the same place, hockey and Gordon Biersch. There is nothing I enjoy more than catching the playoffs with a great beer. However, where you enjoy a Flyer’s victory I am looking for the Penguins to bring home the cup. I may live in Philly but my hometown is Pittsburgh so I will always cheer for the black and gold. Gordon Bierch has been in my head ever since I have been planning a trip to San Fran. Part of my honeymoon will be spent in San Francisco (as well as Napa, Sonoma and Maui) and I was debating whether or not to drop by the brewery. I always pictured Gordon Biersch as a so so brewery. After reading your post about their Dunkelweizen and then jumping to your brewery review it seems like I should put them on my list of beer stops in the city. We already have a tour planed at Anchor Steam and I’ve heard it from enough people to know that Toronado is a must. So, what stops do you suggest for a beer fanatic in San Fran for the first time?

I've been to GB in Atlanta, Memphis, D.C. & Northern Virginia, Scottsdale, and San Francisco. I'd say out of that bunch I've enjoyed the San Francisco location the most. Plus, the newlyweds will get a good lunch and some beers, then be able to walk it off along the Bay and get some great photo ops of the city and the Bay Bridge along the Embarcadero. If they're brewing, you'll get a nice close-up of the process just off the dining room.

Elsewhere in SF? Great job scoring the reservations at Anchor! They can be difficult on anything less than a couple of weeks notice. Honestly, even with all of the wondeful beer "stuff" going on in the Bay Area and SF, the Anchor tour (and hour-long after tasting) could be one of the top highlights. You should definitely get to Toronado also, but for the (imho) perfect experience go a 1/2 mile or so further west toward the Park. At Haight/Masonic is Magnolia. Great thought goes into their food menu (local, sustainable, organic, etc.) and their beer is top-notch. Plus, it's local...not bottled, kegged, or distributed. So, it's a unique experience, for sure. Plus (as if that wasn't enough!), if you enjoy cask-conditioned beer, they've got 5 (or maybe 6?) cask engines going at all times. I would definitely recommend putting aside a couple of hours for a visit there...but even if you can't go for that long, definitely stop in. They'll be undergoing some renovations in the month of May so things might be in a bit of upheaval, depending upon when you go.

It's so difficult (and unfair) to rank, but here goes my order for suggesting what to do if you can in SF. Anchor, Magnolia, Toronado, 21st Amendment, Gordon Biersch, Thirsty Bear, Rogue, San Francisco Brewing. The Watermelon Wheat alone (imo) is worth the trip to 21A. And, if you're a baseball fan, you can walk south to the AT&T Park (or whatever they're calling it now) from 21A. Even if there's no game going on at the time, you can walk around the outfield fence by the Bay (the Park is at the base of the Embarcadero, so it could be tied in with a nice walk to/from Gordon Biersch with AT&T Park in between a 21A visit.)

Throw in a visit to City Beer Store and Wine Club (if you like the grape as well) for some take-home goodies. These are all places that I've visited and I've got reviews on most, if not all of them, to be found under the link to an index of reviews. Other places likely worth checking out based on other's opinions, but I have not yet been to are Beach Chalet, The Monk's Kettle, Suppenkuche, Alembic, Wunder Brewing, and Zeitgeist.

Then, there's the rest of the Bay Area, but you'll need to save that for another a trip :)