Who needs some positive news late here in the week on Friday afternoon?

You may have heard earlier this week of Head Brewer's, Casey Hughes, plan to leave Flying Fish after his upcoming wedding and move to Florida to begin the next chapter in his brewing career.

Here are some more details that he shared with me earlier today. You beer geeks that are also baseball fans will love this one.

Casey will be leaving Flying Fish at the end of May. He'll be moving to Tampa where he will be working as brewmaster with co-founders Kent Bailey and Robb Larson to open the new Coppertail Brewing Company (website coming soon) in the city's downtown Ybor City neighborhood. Until the website is up, you can find them on Facebook. Update: Website now available.

They are shooting for a most opportune opening timeframe: spring training 2014. In case you need a quick reference, when doing your spring training pilgrimage next year, you may have the chance to stop in at Coppertail, visit with Casey, and be within less than an hour's drive in any direction to the spring training homes of the Yankees (Tampa), Pirates (Bradenton), Orioles (Sarasota), Tigers (Lakeland), Blue Jays (Dunedin), and Phillies (Clearwater).

Casey (and his fiancee Jules) have been friends of The Brew Lounge for quite some time and it goes without saying that I speak for many friends and fans of his beers when I wish them all the best in Florida.

I'll leave you with two images of Casey. One with me. For some reason, some of you have suggested there should be more pictures of me around. Not sure if I agree, but I'll allow it here in this case. And, the second one, sort of fitting. While not the best picture quality (it was sort of a "spy" photo out the window of Standard Tap), I like the grainy/hazy silhouette of Casey with Jennie Hatton and the Hammer of Glory during Philly Beer Week. 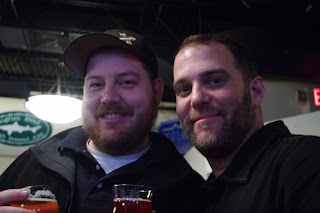 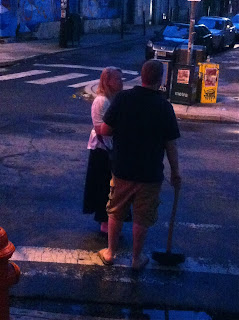