Still going. Working on get caught up around here. This time it's Atlanta's turn in the spotlight. Check back here if you still need to get caught with the "intro", Part I, Part II, Part III, Part IV, and/or Part V. 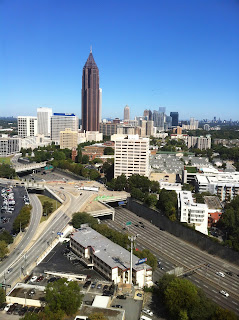 (Hotlanta? The A-T-L? A fun city/region no matter how you spell it.)
Atlanta. The Big Peach. Hotlanta. The A-T-L. New York of the South. Some of the ways in which folks refer to this "new capital of the south". 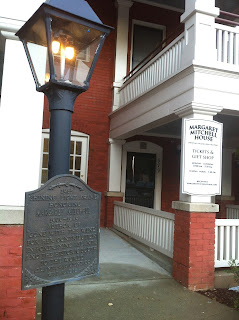 (plug for Atlanta tourism)
But, beer? Not so much a major thread in the fabric of Atlanta until only the past five to ten years. Even fewer years in some areas with still plenty of room for growth.

Atlanta is a destination I've visited many times over the years on both business and personal time. Wonderful friends live in the northern suburbs beyond the perimeter. I've attended Braves games both at the old Fulton County Stadium and the new Turner Field. Run around the city and its sprawling Piedmont Park. Toured the Martin Luther King house and historic site. Climbed Stone Mountain. Caroused through Buckhead and Underground Atlanta, both in their perhaps hipper days. (Haven't seen Buckhead lately. Are they still "recreating" it?)

From Downtown to Midtown to Buckhead to the Highlands, I've seen a lot of Atlanta over the years. But enough about me and the past. Where is Atlanta now and, more importantly, where are they now with regard to the beer scene?

As I mentioned, the last ten years have seen a great deal of change. This change has come partly due to the changing national landscape and general perception of what beer is — what better beer is — but it has come mostly thanks to the maximum ABV in beer being raised in 2004 from 6% to 14%.

Back in the fall, I found myself there again for a few nights and it just so happened to correspond with the all-out blitz that New Holland Brewing Company (from Michigan) was assaulting the greater Atlanta region with. Perhaps assault is an unkind word. Nah, Dr. Joel (an old friend, so I know he'll take this well) was part of the traveling wrecking crew, so we'll go with assault :)

While they made their way from the airport to distributor (United Distributors, if you're one that likes to know these things) to one retail account after another (plus a few, I'm betting, that stayed off the official docket), I joined up with them at a few choice locations including Olde Blind Dog out in the suburban town center of Brookhaven, the Brick Store Pub, and Leon's Full Service, the latter two both in Decatur.

Hm, should I jump directly to Decatur? Nope, let's try to keep some order to this.

Let's begin back downtown and work our way out. Throughout the years, not much has changed in the heart of downtown. Downtown, as in the heart of the business district around the world trade center, hotels, the aquarium, Underground Atlanta, CNN, Coca-Cola, etc.

There's been Max Lager's — at the intersection of Peachtree Street NE and West Peachtree Street NW always a fun joke to play "how many Peachtree roadways are there"? Just take a look at a map, seriously, if you don't understand — for roughly fifteen years and, if you're not planning to wander far from your hotel when staying in downtown Atlanta, Max Lager's will suit you just fine for, say, a bowl of gumbo and a glass of their Red Ale, Pale Ale, or special seasonal brew. 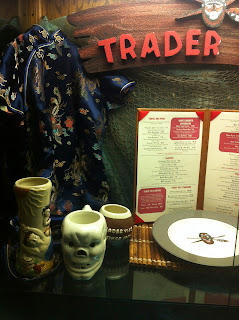 (Trader Vic's is all-around fun in the bottom floor of the Hilton Atlanta.) 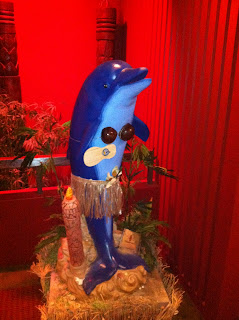 (Trader Vic's for fun and for cocktails.)
In the subterranean level of the Hilton Atlanta, you'll find Trader Vic's and plenty of great island drinks (Mai Tai should be on your short list), but the topic here is beer, so let's stick with that for the time being. Just remember, if you need a break, Trader Vic's is a fun stop to make.

Wander farther north into Midtown and you'll find a couple of solid standardbearers: Vortex Bar and Grill and Gordon Biersch. Vortex has been doing their thing in their own unique way to bring better beer into Atlanta for a good twenty years. Gordon Biersch and their solid, predominantly lager-based, lineup of beers can be experienced at their nearly 40 locations nationwide. 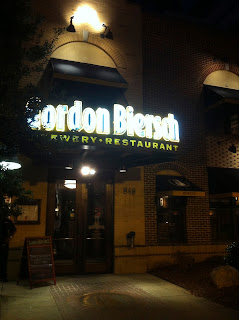 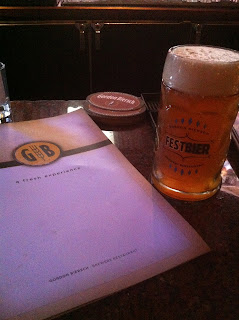 (Oktoberfest to quench a post-run thirst at Gordon Biersch in Atlanta's Midtown neighborhood.)
During this trip, a quick bite and an Oktoberfest got me started on the right foot after working up an appetite running a seven mile route in and around the wonderful Piedmont Park. Once again, I digress. I started a lively conversation at Gordon Biersch about just how much the local sports fans must miss a one Michael Vick. Then, I left and made sure no one followed me to Vortex. There are a bunch of new breweries, as there seem to be in just about every corner of this fine country, popping up and Atlanta has no shortage. 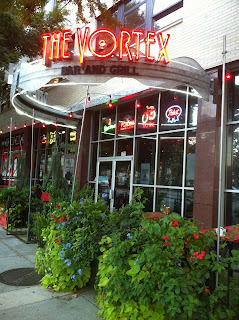 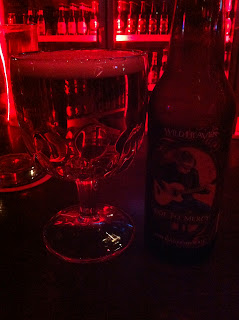 (The lighting at Vortex Bar and Grill in Atlanta's Midtown neighborhood is not easy on flashless photography. Here, the Wild Heaven Ode to Mercy Imperial Brown Ale.)
At Vortex, along with a way-excellent Cubano (at the time I remarked, quite possibly one of the best I've ever had) and some plantains, the specially-brewed Hoplanta (brewed for Vortex by twenty-year-old Red Brick (fka Atlanta) Brewing) went down real nicely. But, it was the rather new Wild Heaven and its Ode to Mercy Imperial Brown Ale that knocked my socks off and prompted me to call it one of 2012's most memorable beers.

Is anyone gonna remind me about Decatur? Anyone? No, I did not forget. But, before we get to Decatur, it was a meet up at the Olde Blind Dog Irish Pub in suburban Brookhaven. I took MARTA's train line out there and once you get past Buckhead you start to think, yeah I'm out there. 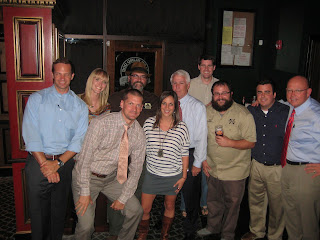 (An assortment of staff and execs from the pub, the brewery (including Fred Bueltmann, third from back left, and Joel Armato, third from front right), and the distributor at Olde Blind Dog Irish Pub in Brookhaven, Ga.)
Olde Blind Dog is in one of those suburban town center type of setups and the inside of this particular Irish Pub incorporates both an indoor and outdoor Irish Pub feel. I'd attempt to describe it more but I get a feeling you don't really care. It definitely has a comfortable feel for waiting on the New Holland crew (distributor meeting/training) to show up to share some light bites and bigger beers. Dragon's Milk for happy hour? Sure thing.

Definitely fun seeing "Dr." Joel, Pennsylvania transplant (to Michigan), cross paths with me in Georgia. So much so that we met up again a few hours later in — wait for it — you guessed it, Decatur.

Remember all the way back up top when I described the slowly changing (more rapid of late, but slowly still all the same) beer scene in Atlanta? The reason I do look forward to an Atlanta trip is because of Decatur. Used to be, there was one place and one place only that I focused on visiting at some point during each trip. I've made it my first stop from the airport, I've made it my last stop from the airport.

This time it was around 9 o'clock or so when I jumped off the train in the heart of Decatur (only a 20 minute train ride from downtown Atlanta. Very convenient.) to meet up yet again with the New Holland crew. This was bound to get ugly.

For those of you who keep track of my blatherings, you may recall me for years talking about the worthiness of Brick Store Pub. Because I sure recall many of you crinkling your foreheads and saying something like "yeah right, Bryan, you expect me to believe that one of the best pubs you've been to in the country is in Decatur, Georgia?" And, I'd say something like "yes, believe me. What you don't trust me? You don't think you know what I'm talking about? (flashback to 2006)

Okay, enough of my showing off. Because it was a few years ago that one of those online ratings site (or maybe more than one) and some public opinion polls began also naming it as on of the country's best. Then, a few of you that I know personally checked it out for yourselves. 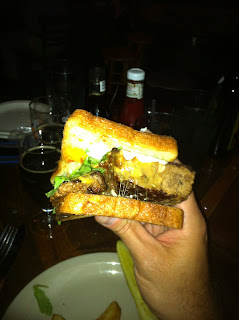 (Meatloaf Sandwich at Brick Store Pub in Decatur, Ga.)
So yes, I stopped in again and yet again it exceeded expectations. One of the best beer lists around. An ever-changing food menu with lots of locally-sourced meats and cheeses. A friendly and incredibly knowledgable (but, not pretentious) staff. Comfortable environs from the spacious downstairs to the cozy upstairs. I can't get enough and I certainly hope for all of you that you too can get there someday. It really is the beer reason to visit Atlanta … I mean Decatur :)

Speaking of Decatur, though, I shouldn't neglect to mention Twain's Billiards and Taps for decent beer, pool, and sports, which has been there for quite some time. Do believe I wrote about it, as well, way back when. Ah, yes, here is the link.

There's also a Taco Mac (reputable sports/taco/craft beer bar chain with 25+ locations) and Square Pub which both hold their own when it comes to well-regarded beer lists. 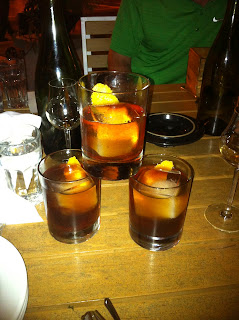 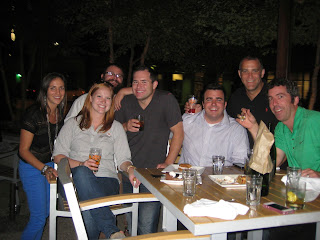 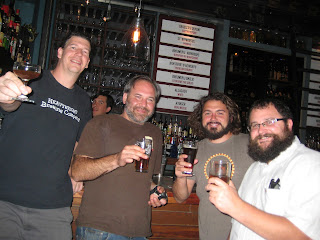 (at Leon's Full Service in Decatur, Ga., from left: Lee Dickson, Brick Store Pub; Bob Rhein, Square Pub; Brian Watts; and Dr. Joel Armato, New Holland Brewing)
But, the last place that I tagged along with New Holland to was one last stop (well, one last for it was pushing up against the last train back downtown) just around the corner from Brick Store Pub and conveniently pretty much on top of the train station — Leon's Full Service.

They've pretty much also got most of "it" going on here as well. Cocktails by expert mixologists, well-composed beer list, creatively interesting food, friendly (once again, seems to be a theme around these parts, eh?) staff, plus a spacious outdoor seating area when the weather cooperates. Here was quite the meet up of beer folks from local beer press, publicans, and fans all to check out what Fred Bueltmann and company brought down from Michigan.

New Holland and its Devil's Milk went down to Georgia, literally. I'm not certain anyone's been the same since.

And, with that, let's leave Georgia and roll just a few last parting shots…… 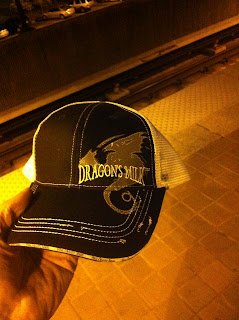 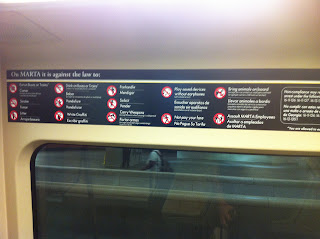 (I've spent a fair amount of time on MARTA's trains and can't figure out why there are not translations for all of the prohibited activities.) 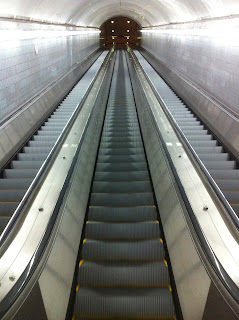 (Fortunately, after a night out with the New Holland crew, the escalators from MARTA trains to street level were operating.) 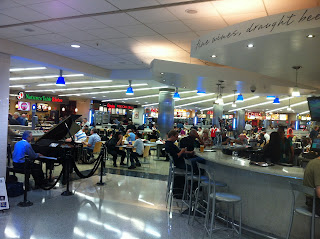 (One heck of a comfy international terminal food court/bar area with a live piano player.) 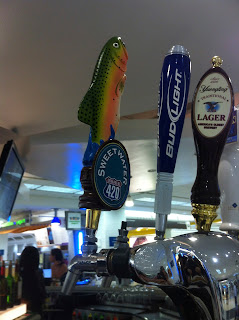 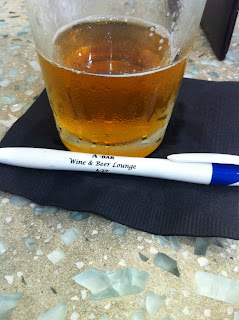 (flying out of ATL in class at the international terminal's Beer Lounge. Who can't get comfy in joint like that? With Sweetwater 420.)