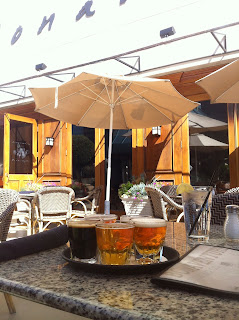 Life has been moving entirely too fast. And, judging from the looks of things around here in the written sense, it'd be fair if you thought I've been leaving this beer thing behind. But, nothing could be less true.

It's interesting that as I've been contemplating the past, the present, and the future around here, it seems as if Stephen Beaumont has gone through a bit of his own wrestling with how he does what he does (at least in the online sense) and has taken a course of action. I like it. At the same time, Jack Curtin seems to be consolidating efforts with The Beer Yard in an effort to streamline the work it takes amongst the growing mountain of things to talk about in the world of craft beer.

Have I scaled back the number of beer dinners that you know I've been so fond of attending in the past? Yes. And I certainly have dropped back from the frequency that once saw me two years ago attend six beer dinners in fifteen days.

Have I been attending less beer events on a whole? Yes. However, that has allowed me to (hopefully) make wise decisions about the ones that I do attend.

Am I even too busy to conduct my annual Philly Beer Run with Dock Street during this year's Philly Beer Week? Yes, sadly and regretfully. This is the first time I've said it in public. However, there may be a scaled-down version just to keep things fun and so you don't forget that beer and a healthy lifestyle can go hand-in-hand quite nicely.

No, I've not been more absent from the beer scene just because you may have seen much less content from me both here and in the Communities pages at The Washington Times.

My day job (as most of you know as nothing to do with the food or beverage industries or writing about them for that matter) has been keeping me as busy as ever. As you can imagine, from a financial perspective, it's the prudent thing to stay on top of that first.

And, the whole "running thing". Yes, many of you also know that I have a fondness for running. For distance running to be more specific. For those things over 10-Ks up to and including marathons. Those marathon excursions take a whole lot training, focus, discipline, and control. Control over caloric intake. Control over smart and strategic caloric intake. That is, if I want to do anything more than simply finish.

But while I've cut back on the long form writing over the past nine months or so, I haven't cut back on what you all seem to find the most valuable: the calendar and weekly updates. If I'll ever pull an all-nighter to ensure that you get something fresh on tap at The Brew Lounge, it'll concern my scheduled weekly/monthly calendar updates and the weekly wrap-up of newsy notes and links.

(You may have also picked up on the bi-monthly e-mail that I send out for the Mid-Atlantic Brewing News — called Hop Tips — that covers a beer calendar from North Jersey through southern Virginia. If not, go sign up for it now. I know a lot of you like to travel and find good beer along the way; this could be quite useful to you.)

Ah, and yes, the dreaded Facebook and Twitter. Well, maybe not so dreaded. Somehow I've amassed (with barely any try on my part) around 800 "followers" (ooh, doesn't that sound creepy in light of that new show on the Fox network?!) on Twitter and 600 "fans" on Facebook (even goofier sounding). It certainly does help live up to its category of "Social" Media. Though, I'd argue, dreaded on the otherhand in that it's a bit of writing (true writing) killer. At least for those of us with limited time and energy.

Twitter has been, for what's it's worth, a pretty effective way of communicating for me while at an event. It's quick and it gets out a message. Though, as some of you know, I struggle with that medium and the message, if any, that it conveys.

I'm still having difficulty grappling with what constitutes a successful use of social media. If I go to an event, blast out a handful of tweets and/or status updates along with some pictures, get some people to "like", "favorite", and retweet (god forbid, maybe add a comment), has that been a successful use of the place that I occupy in the beer media? Have I done "my job"?

Is it enough to cover an event via social media? Social media only? Dunno. If I write a 2,000 word essay complete with full sentences and paragraphs (remember those?!), but no one shares via social media or comments (HEY! I don't even use captcha; how much easier could it be?!), has it been a waste of time? If it doesn't garner a few nickels for me to rub together? What constitutes a job well done and a successful one at that?

Uh-oh, getting to be a few too many capital letters and exclamation points around here. I know, a lot of that so-called navel gazing. And, we're moving along people.

Well, I'm going to give a run-down of my life in beer through my travel lens since July 2012. I know, it sounds daunting. But, I think I've found a way to make it digestible. I won't cover more than one city/region or theme at a time. I'll try to stay focused on useful bits of information for most of you. And, a few carefully chosen embedded pictures just like I used to do here around these parts.

I think this will be good for me. Hopefully, it will be fun for you too. Maybe you'll even be moved to +1 some stuff along the way...."like" it on Facebook..."favorite" it on Twitter (maybe even complete with a retweet...even more valuable). Drop a comment, the way we used to talk around here.

Let's get this thing righted (writed) and see where things go. Maybe this blog medium is done. At least Google is giving up Reader, for whatever that portends. Maybe Maps are next to go?!

Then, we'll see where the ship goes from there. Maybe I can do this all without attending the Beer Bloggers Conference for a few pointers. (If you didn't know, yes, there actual is one of those things.) Maybe I'll even honestly earn the nomination for Beer Writer of the Year.

See you along the way.