Writing this ship, Part II (all over the place, part 1) 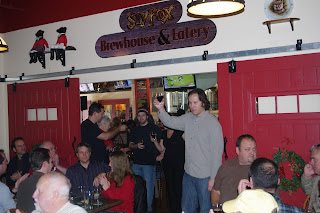 If you keep up around here at The Brew Lounge on a regular basis, this may be an easy post to get through. In my continued effort to clear the backlog and bring us all up-to-date around here — and, in part, make amends for my perhaps perceived absence — Part II here focuses on a bunch of miscellaneous TBL activities from July 2012 through December 2012 mostly focused from New York through Delaware.

July
- There was Ommegang's BCTC as has come to be a summer tradition since 2004. Of course, I wrote about it here at TBL as well as over at After Hours. They were both popular features and definitely gained some traction over there at TWT. Check 'em both out if you had previously not. Jury is still out whether I'll be making the trek again this year. The streak may finally be broken.

- Also in July was the excellent Russian River beer dinner at the lovely Yardley Inn along the banks of the Delaware River. I wrote about it, as well, over at After Hours. I can only imagine that it was probably the only beer dinner where Russian River's beers were featured where there was a table that did not touch a drop of the five excellent beers set in front of them. They were close-minded wine people, whaddya want?

September
- You probably know that Sly Fox is up and running with their new production facility (and Tastin' Room) in Pottstown, Pa. The land around the brewery creates the perfect space for outdoor events. In September, they moved their Kan Jam from Phoenixville to Pottstown and added some excellent live music all day long.

- Every year, the reputation of Yards' Smoke 'Em If Yous Got 'Em event seems to grow. It helps that craft beer lovers are finding their way to these unique beers more than ever. And, that there's excellent professional and amateur barbecue served up along side.

- That was in September. So was the Dogfish Dash in Milton, Del. Good thing I do this running thing, especially when the the decadent Yards event was the week before.

October
- As I was gearing up for the Harrisburg Marathon in November (well, actually, for the NYC Marathon, but I think we all know what happened there), there was one last beer dinner to squeeze in that'd been on my mind for quite some time at Anthony's Coal-Fired Pizza. Here's the recap of a dinner at their Horsham, Pa. location with Victory Brewing Company as the beer pairing companion.

November
- Not much to share with you from the beer world in November as I finished training for what would become my new all-time best marathon finishing time at the Harrisburg Marathon. But, as I can recite, to the second, each of eight marathon finishing times, I can also tell you the first beer I had after each marathon. Typically, I aim for something local to complete the association of the the race, the place, and the beer. In this case, it was a post-Marathon lunch and beer at nearby Tröegs in Hershey and the beer was a Scratch #78 Fresh Hop Ale. What they're doing at the brewery simply adds to making Hershey the Sweetest Place On Earth. If you haven't been, add it to your short list. 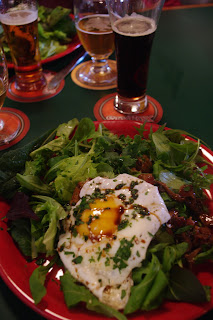 December
- December, like November, was a fairly quiet month for me in terms of getting out into the beer events circuit. One that I wouldn't skip, however, was the Sly Fox Anniversary breakfast. It was one of several things that I would find over many of the last several "lost months" that went undocumented here in the pages of The Brew Lounge. While there are many beer events that can justify taking vacation time from work, breakfast with the Sly Fox folks is one that will both entertain and nourish you. I've added a few pictures here for your enjoyment. 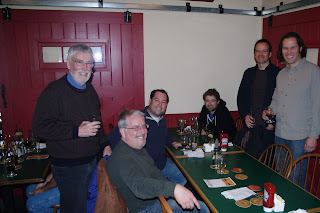 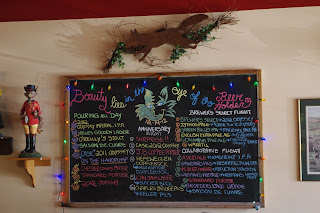