Anchor Brewing's special place in American brewing history is well-documented. If you're not familiar, I strongly suggest checking it out over here. In my frequent trips to the Bay Area over the last twenty years, I've drank plenty of Anchor around town, at the SFO airport, and been to the landmark brewery twice. Somehow, in all my grand organization of pictures on my numerous hard drives, I'm not able to dig up the interior brewery tour pictures I have from the past. Just the more recent exterior ones I've included in my PDF below.

Around ten years ago, an unfortunate cross-country flight delayed by more than three hours, had me missing my invitation to the brewery's annual holiday party. But after this feature, I'm pledging to take them up on their offer for a re-visit (finally!) during my next trip to the city.

The last time I was there, the legendary former owner Fritz Maytag was on-site and joined our tour group in the tasting room for the end-of-tour samples. Maytag also attended his brewery's event at The Four Seasons in 2008 during the inaugural Philly Beer Week, making that event all the more special. From another personal angle, it was rewarding to speak with Maytag's friend and brewery ambassador, Andy Musser (rip), at events. It was always a fun conversation alternating between baseball (Musser was a Phillies announcer, too, if you weren't aware) and beer. Had such a conversation in the galley of a cross-country flight that he and I were both on maybe fifteen years ago. But, I digress....

The new era of Anchor sees longtime familiar faces like Maytag, Mark Carpenter (brewmaster since 1971), and others retired/moved on. The newest owners, Japan-based Sapporo, acquired Anchor in 2017, but the beer persists. I miss the Brekle's Brown, Bock, and interesting beers from the Zymaster Series, But, in addition to Steam, I still find myself eagerly seeking out the Liberty Ale, Old Foghorn, Porter, and the annual changing recipe that is the iconic Christmas Ale.

Now click the picture below for a full feature on Anchor Steam. 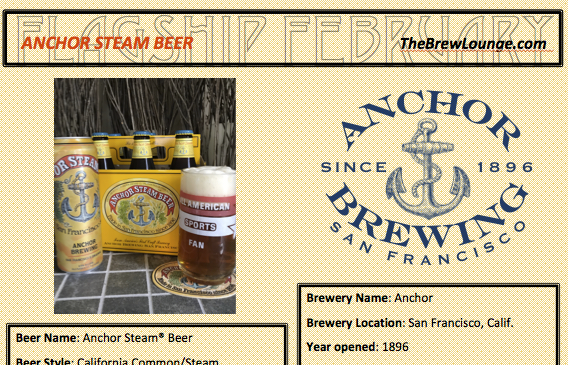 Disclosure: For this project, I solely created the list of 28 beers featured here on The Brew Lounge. I was in contact with each brewery and neither required nor requested complimentary samples. I purchased today's Anchor beer at retail, but was also provided with the "stovepipe" can sent from the brewery as part of a media mailing.