Today's featured Flagship February Beer is from a brewery about to celebrate its fifth anniversary. Remember, I said I'd be featuring older and newer breweries, alike, in my daily features throughout February.

Tough to believe that this brewery that sits just steps from the Schuylkill River Trail opened on April 1, 2014. In five short years, they're about to have the company name on their fifth location. I wrote a bit about the Bridgeport brewpub when it opened in 2016, check it out here. The new brewery in King of Prussia will feature a 30-bbl brewhouse and 30- and 60-barrel fermentation tanks as well as their own canning line, giving them, as Andrew Horne (Dir. of Brewing Ops.) said, more flexibility.

At the get-go, I was a huge fan of Conshohocken's ESB, a sometimes, shall we say, forgotten English style. From a brewer's perspective, Horne says it's a deceptively complex style, even calling it the "ale version of a pilsner". I'm such an admirer that Puddlers Row makes regular appearances on my draft system at home.

I've been seeing more of the style at breweries in recent years, and that's a good thing, but it can still use more attention. Especially for well-made ones like Puddlers Row. There have been two World Beer Cups competitions since the brewery open and the beer has garnered a silver medal each time.

Now click the picture below for a full feature on Conshohocken's Puddlers Row ESB. 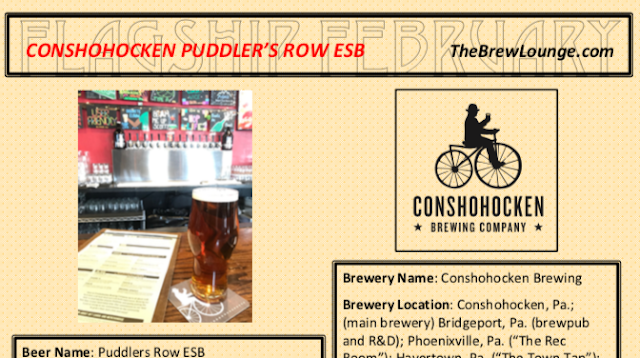 Disclosure: For this project, I solely created the list of 28 beers featured here on The Brew Lounge. I was in contact with each brewery and neither required nor requested complimentary samples. This beer was provided by the brewery while I discussed Puddlers Row and the brewery with Horne and sales rep, Max Hovey, at the Bridgeport location.