This marks halfway through Flagship February. Surprised by any of my picks thus far? Hoping to see any still pop up in the next 14 I have to feature after today?

Not many breweries can stake a claim to a well-made milk stout as one of their longtime flagships. Lancaster Brewing has a long history in the city and for almost 15 years have had a location on the outskirts of Harrisburg as well. As with my Manayunk feature yesterday, I need to fess up to not having been to LBC in over two years. Been to the first two versions of LBC, but not yet to the new Taproom at all. Another bit of negligence that needs fixing.

Wish the Amish Four Grain Ale had survived as an LBC flagship, or at least seasonal, but alas we still have the Hop Hog and the Milk Stout as year-rounds amongst solid seasonals such as Jump Seat Black Lager and the Lancaster Kölsch.

Now go click the picture below for a full feature on Lancaster's Milk Stout. 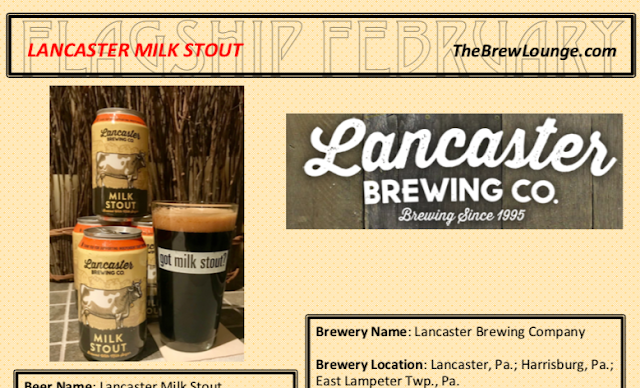 Disclosure: For this project, I solely created the list of 28 beers featured here on The Brew Lounge. I was in contact with each brewery and neither required nor requested complimentary samples. I purchased today's Lancaster beer at retail.