This one is as Flagship as they come in the city of Philadelphia. Leading the charge into the micro/craft beer revolution in Philly, and really let's not kid ourselves, at that time the country, Rosemarie Certo (and her husband at the time, Jeff Ware), unveiled Dock Street to the beer-drinking public in 1985 with the Bohemian Pilsner as part of the trio of original beers. It was second out of production after the Amber Ale. For me, it was a few years later, in the early 90s, along with Amber and Illuminator Doppelbock, that my first tastes of Dock Street beers were enjoyed.

The pub's suave style on 18th Street where they were originally located certainly fit the neighborhood of Center City accounting and law firms and high-end hotels. The complimentary billiards table in the back room was worth the extra couple bucks for the on-premises made beer. And, some well-known names have been associated with that brewhouse including Chris LaPierre, Will Kemper, Nick Fennell, Eric Savage, Vic Novak, and Bill Moeller.

The new location, est. 2007, to me fits who Dock Street is, or maybe better put, who they were meant to be. In a converted firehouse in a part of West Philly that has seen gentrification encroach at a somewhat slower (and therefore more welcome?!) pace compared to other hot neighborhoods in the city, Dock Street is a welcoming come-one, come-all brewpub (or, in their words "...a progressive and eclectic counterculture and a mixture of race, creed and background) that focuses on solid beers and food, particularly the pizzas and, thank the almighty, Trio Fries which have survived the move to West Philly. If you're an 18th Street original, you know what I mean.

Brewers that have touched down at 50th and Baltimore have included Scott Morrison, Vince Desrosiers, Justin Quinlan, and Ben Potts. Today, the brewery's award-winning ways continue under Mark Russell. The last one was at the Great American Beer Festival in 2017 for Man Full Of Trouble Porter. The family feeling at Dock Street is not just stemming from the "kids" involvement in the business (son, Sasha, has been involved in brewing and daughter, Renata, whose title includes marketing, sales, and business development), but Marilyn Candeloro, VP, has been around for almost ten years and, with her hands seemingly in most aspects of the business, feels a bit like family too.

Showing their inclination to grow, they've opened the adjacent Cannery & Lounge next door for something of a hidden getaway drinking session that includes their beers as well as craft cocktails and draft wine. Next up (maybe in late summer/early fall if things progress as hoped and planned), will be a South Philly outpost on Washington Avenue. Call it Dock Street South for the time being.

Love me some Rye IPA and Prince Myshkin. And, others from their always evolving beer menu. For example, act now and you too can have an excellent Altbier named Passive Specificity. But, for an all-day drinker, it's BoPils for me. For the nostalgia and for the love, still, of a great beer.

Now go click the picture below for a full feature on Dock Street Bohemian Pilsner. 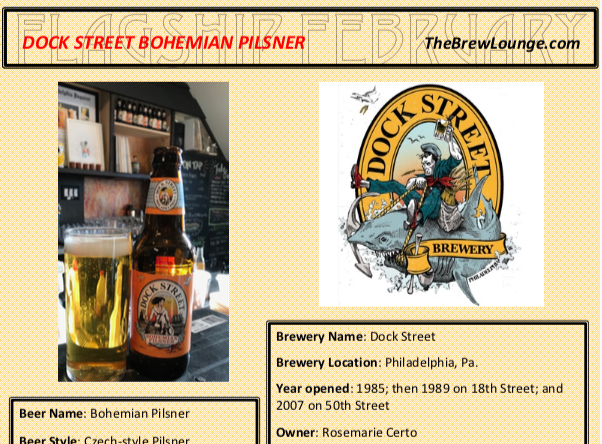 Disclosure: For this project, I solely created the list of 28 beers featured here on The Brew Lounge. I was in contact with each brewery and neither required nor requested complimentary samples. Today's beer was provided to me by the brewery while I was at Dock Street to chat about the beer and the business.