Workhorse found a big building - 70,000 sq. ft. big - to open one of the newest breweries in the Philly suburbs. And they brought in an award-winning brewer to make a lot of beer. It's a 30-bbl brewhouse with 30s and 60s for fermentation. They're making a variety of beers, but they've also defiantly bucked the trend of many opening breweries that want to be all over the map (on purpose); they're sticking to their guns of making solid core beers. Vienna Lager is one of them. And we should all be paying attention.

Nate Olewine brought his resume from two breweries with a heavy Lager bias - Devils Backbone and Victory. The Helles is excellent as is the Pilsner. But that doesn't mean that the other flagship - West Coast IPA - is a slouch or that he doesn't dabble in Brut IPAs (just did his first), New England IPAs (is another core/flagship), or Russian Imperial Stouts (haven't been able to vouch for this one yet).

The brewery has been sticking to its draft-only approach for the first year with intention of getting packaged product out in cans later in 2019. Early Spring is when we can expect to see a new packaging hit the market - 8 oz. cans of their six flagships in a package called "Flights To Go". All part of a measured approach that appears to be working thus far with the recognition not only from consumers but from industry folk as well.

Now click the picture below for a full feature on Workhorse Vienna Lager. 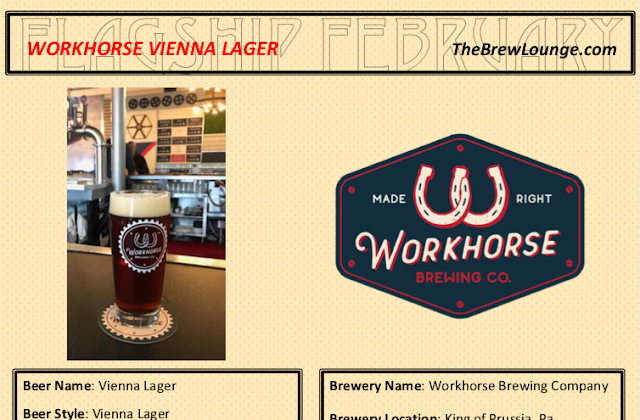 Disclosure: For this project, I solely created the list of 28 beers featured here on The Brew Lounge. I was in contact with each brewery and neither required nor requested complimentary samples. Today's Workhorse beer was provided to me while  at the taproom for a private event.