Hershey was already on the map, no doubt. The chocolate museum, minor league hockey, the amusement park, the hotel & spa, the botantical gardens, the auto museum, and more are all big draws for the city and region.

For beer lovers, if any of that wasn't enough, Hershey quickly moved up the priority of travel destinations once Tröegs Independent Brewing relocated its brewery there from Harrisburg in 2011. Not only did the Tröegs team move operations, they took the next big step (and money!) and made it into a first-rate brewery experience. The opening of the Splinter Cellar addition in 2016 continued that theme.

As for the beers, Perpetual IPA has quickly become a rockstar for them as Troegenator Doppelbock and Nugget Nectar have been for even longer. Sunshine Pils is on tap every summer at my house. The Scratch Series has long impressed with unique one-offs that occasionally sends one of its own into regular or semi-regular rotation.

But, for a feature here, HopBack Amber has long impressed me as a solid beer worthy of multiple in any given session. If Rugged Trail Nut Brown Ale was still considered year-round/flagship, I might have given the nod in that direction, but HopBack will suffice quite nicely for today.

Now go click the picture below for a full feature on Tröegs HopBack Amber. 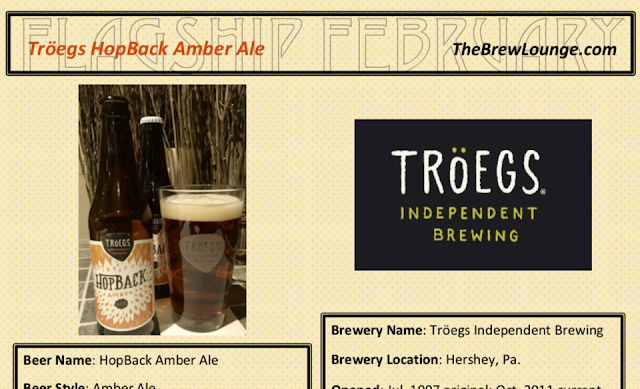 Disclosure: For this project, I solely created the list of 28 beers featured here on The Brew Lounge. I was in contact with each brewery and neither required nor requested complimentary samples. I purchased today's Tröegs beer at retail.