Today's featured Flagship February Beer is from a brewery even younger than yesterday's. Second District is coming up on its second anniversary and was opened by Curt Decker after settling on the location deep in the heart of South Philly after closing his Nodding Head brewpub in Center City in 2014. In this newest endeavor, Decker has perfectly captured the essence of a Philadelphia neighborhood pub, where the beers are made by seasoned brewer Ben Potts (Dogfish Head, Dock Street, and Tired Hands).

And the Bancroft Beer that I'm featuring here? It's their flagship and, actually, it's the only flagship of theirs. And it's pretty straightforward in its naming inspiration in that the brewery/pub sits on Bancroft Street. Sometimes one is just the right number of flagships to have if you do it really well.

Now click the picture below for a full feature on Second District's Bancroft Beer. 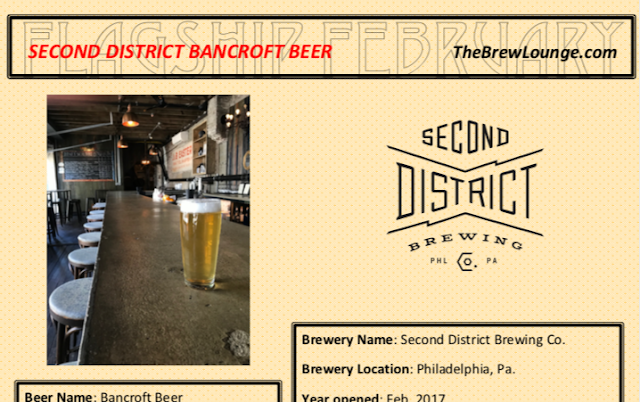 Disclosure: For this project, I solely created the list of 28 beers featured here on The Brew Lounge. I was in contact with each brewery and neither required nor requested complimentary samples. Today's beer was provided by the brewery, when I stopped in for lunch and a chat with Decker.