I'm honored to be one of 28 writers across the globe writing about a specific brewery/beer during Flagship February. Today is the day for my feature. I chose Stoudts and its first ever commercial beer, Gold -- for reasons of style, of the people, of the history, of the backstory, and of the quality beer that it still is today.

It's been a treat - I at least can speak for myself and many others that I've talked to in person - to read about and spend some time connecting, and in some cases re-connecting, with solid beers that have played a part in paving the way to where the beer industry is today. There have been writers from Europe, South America, Canada, and the U.S. extolling the virtues of breweries and beer that have stood the test of time and deserve to not be overlooked in today's manic beer world. I've learned about beers that I admittedly had not previously known.

Stoudts, no doubt, belongs on this list. There's a lot to be said about Stoudts Brewing Company. 32+ years worth when you take into account the research spanning Germany and the U.S. that Carol Stoudt embarked upon when conceiving and building the landmark brewery that sits near the border of Lancaster and Berks Counties in rural Pennsylvania. In Pennsylvania Dutch country, if you will. Or, Amish country.

But in Stoudts' country, it's Beer, it's food, it's family, and it's a passion for all of it. It's rubbed off on staff and on loyal customers through the years. Between what I've written over at FlagshipFebruary.com and what I've included in the feature here, I'll leave it at this for now. It was a treat to spend some quality time in Adamstown with Carol Stoudt and Kurt Bachman and again when they joined Tom Kehoe for a Flagship February event at Memphis Taproom in Philly earlier this month.

Now click the picture below for a full feature on Stoudts Gold. 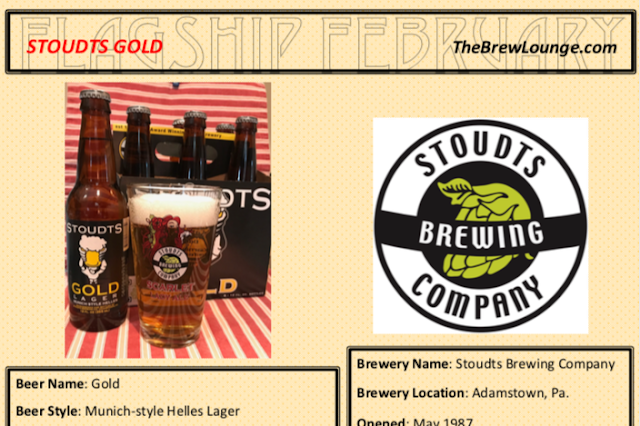 Disclosure: For this project, I solely created the list of 28 beers featured here on The Brew Lounge. I was in contact with each brewery and neither required nor requested complimentary samples. I purchased today's Stoudts beer at retail, but was provided with additional sample while at the brewery interviewing Carol Stoudt.