I'm closing out the month of #FlagshipFebruary with two American classics that help start us down the road to where we are today. Throughout the month, I first featured 26 flagship beers in the greater Philadelphia region. Then, yesterday, I featured Anchor Steam and today I bring this undertaking to a close with Sierra Nevada Pale Ale.

Similar to my mention in Anchor's feature, Sierra Nevada's place in American brewing history is well documented and cemented. A book could be written (actually, owner Ken Grossman did write a book) about everything from the simple beginnings to the complex organization that the brewery has become.

After many, many dozens of trips to northern California, I finally made my first visit to the brewery's HQ in Chico in late 2017. I'd been to their satellite location in Berkeley - The Torpedo Room - already a few times. In Chico, I got the VIP treatment with food and beer and a two-hour tour and sampling. Even sampled Celebration from the zwickel. Now I need to add Mills River, NC to my travel list to see the brewery's east coast operation, which I'm told takes the patchwork Chico brewery and perfects it into something even more grand - the Disneyland of Beer, if you will.

Now click the picture below for a full feature on Sierra Nevada Pale Ale. 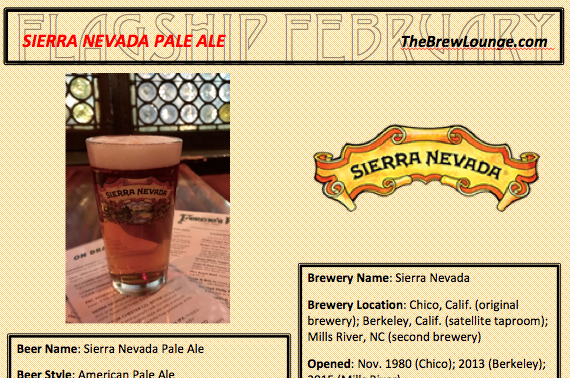 Disclosure: For this project, I solely created the list of 28 beers featured here on The Brew Lounge. I was in contact with each brewery and neither required nor requested complimentary samples. I purchased today's Sierra Nevada beer at Fergie's Pub, which participated with Flagship features throughout the month on beers like Sierra Nevada's Pale Ale.