Today's featured Flagship Beer of February comes from one of Philadelphia's (the city, not the region) oldest and destination breweries — Yards. But, it also presents me with my biggest conundrum in this first week of Flagship February. And also serves as a reminder that I need to do a better job of staying current and informed.

How's that, you ask? Well, the ESA. You know, the beer that started it all for Yards back in the 90s during their garage operation days. It carried them through three more brewery locations and, at least to me if not to many of you as well, serves as an immediate reference point for the brewery. Sure, today you could make an argument with younger beer fans that the Philadelphia Pale Ale or Brawler could be equally so. But when I made this list a month ago of beers to feature, it was simply natural for me to put Yards ESA on the list.

Talking with Tim Roberts, head brewer, he assured me I could leave it there, even considering that bottle distribution had been pulled back and that it accounts for less sales than it used to. Maybe, come to think of it, that makes the ESA even moreso qualified for this Flagship February project's original intent — that is, highlighting seminal brews that helped "get us here", regardless of current sales figures.

All that aside, I'm featuring ESA today because of its historical role at Yards...at Philadelphia bars...and in the minds and palates of better beer drinkers for the last 25 years around Philly. And, because Andrew Horne mentioned it as an inspiration in the Puddlers Row ESB out in Conshohocken. And because I drank it on the gravity-run draft line at Bridgid's when I lived in the Fairmount neighborhood of Philly. Well, I would've done it even if Horne hadn't said so, but it definitely adds to the brewhouse cred of Yards ESA.

Now click the picture below for a full feature on Yards ESA. 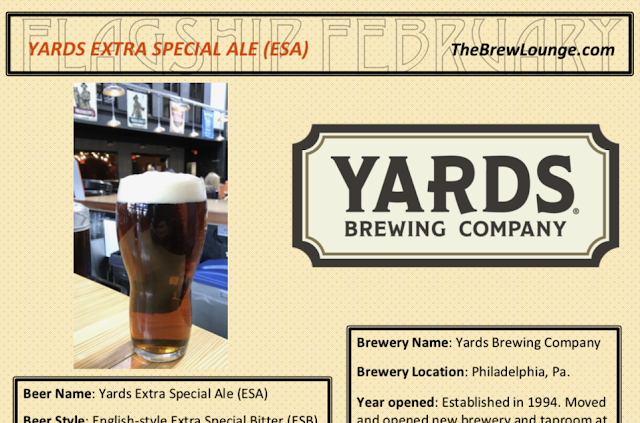 Disclosure: For this project, I solely created the list of 28 beers featured here on The Brew Lounge. I was in contact with each brewery and neither required nor requested complimentary samples. This beer was provided to me by the brewery when I stopped by for a quick chat and an updated taste of the beer with Tim Roberts.
© Bryan J. Kolesar and The Brew Lounge, 2019. All content is owned and uniquely created by Bryan J. Kolesar. Unauthorized use and/or duplication of this material without express and written permission from Kolesar is strictly prohibited. Excerpts, images, and links may be used with advance permission granted and only provided that full and clear credit is given to Bryan J. Kolesar and The Brew Lounge with appropriate and specific direction to the original content. Contact Kolesar at TheBrewLounge@gmail.com