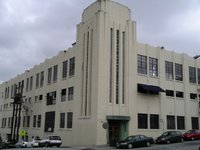 San Francisco. Anchor. Beer. Free Tour. Free Samples. Must Go. I could stop with these incomplete sentences and make it my shortest writing ever. But, you know me, heheh, I do not feel like I'm giving it an honest effort if I write less than 500 words. And, given that the topic here is Anchor, Fritz Maytag, and San Francisco, I may not be able to stop before 1000 words. Of course, I jest.....maybe... :) 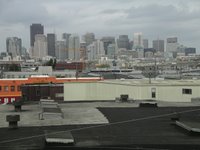 Anyone following closely enough will notice that my beer tour of San Francisco is being written out of order. I am sure no one really cares, but this was my second to last stop during my almost 90 hours in this great city. As you will soon be able to tell, it was certainly one of the highest of highlights. This was one stop that I was certainly hell-bent on making when in San Francisco. Considering Fritz Maytag's standing in the history of craft beer, not to mention my taste for several of their brews, I would have been disappointed not to make the visit. The trouble is that it's not quite walkable (though, flat by San Francisco standards!) therefore it would require a taxi or bus ride to get to the foot of the Potrero Hill neighborhood. Plus, you need to certainly allocate close to 3 hours from the time you leave your downtown hotel to the time you return from this excursion. I was barely able to squeeze this in before leaving to fly home. In addition, you must call ahead to reserve your spot in the tour (they recommend "as far in advance as possible") due to the overwhelming popularity of the guided tours. Dan was our friendly and knowledgeable host and tourguide through the history of Anchor. After checking in at the front desk 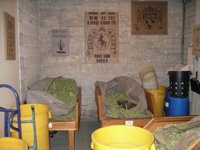 and browsing the memorabilia at their makeshift bar, he led us off on a tour of the facility. He dealt many interesting tidbits of information to us during the tour. I will attempt to drop in as many as I can recall throughout this review. The first bit I was surprised by was that all of the Anchor available anywhere in the world is brewed, bottled, kegged, etc. from this single location in San Francisco. This surprises me partly because my experience is that Anchor is not particularly difficult to find. (I may be a bit biased, though, by living in a beer-rich region of the country.) So, to think that any Anchor beer originated from this decent-sized, but not large, facility is a bit amazing. 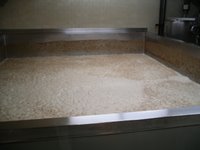 Our tour followed the natural life cycle of a beer. While we did not go onto the roof of the building to see the grain towers (!), we could see from where the grain entered the building, to where the mash tuns continue the process, to the fermenting rooms (separate for ale and lager), to the fresh hops, to the filtering, to the chilling room, to the bottling and kegging lines, and to the packaging and pallets of beer. Since all of this talking about beer and observing the process should work up a thirst and hunger for the real thing, we logically concluded the tour back in the tasting room at the bar where we began. A fun sighting at the end of the tour was Fritz Maytag in what appeared to be a business meeting in his office. We could see him with a few other business-looking types conducting what looked like a planning meeting. I wondered how many other tour groups see Fritz while on site; but, I did not care because this was my tour! {evil laugh} 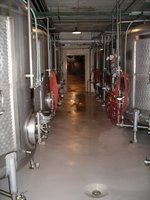 Being poured from the taps in this particular March, in order, were: Summer Ale; Liberty Ale; Anchor Steam; Anchor Bock; Anchor Porter; Old Foghorn. Trying to place these beers in order by my preference was extremely difficult. This was a first experience for me with the Bock and I was quite impressed. It had been a while since I tasted the Old Foghorn barleywine, and I was treated to two samples; obviously, not disappointed at all by this big and tasty brew! The Liberty Ale (which was, by the way, the "original" of the annual Our Special/Christmas Ale) and Porter were both very good representations of their respective styles. The Summer Ale fit the profile and was an acceptable, but not favorite of mine. And, finally, what can I say about the Anchor Steam? This classic American beer, has always been one of my top ten favorite beers, albeit a lager. (For my preferences, it is a difficult feat for a lager to make my all-time top ten list!) This was one of the beers that helped turn me on to "real beer" approximately 15 years ago. Anyone hoping to get a peek or a taste at the whisky that they distill will be disappointed. The operations are across the street and must be legally kept separate from the beer brewing business. 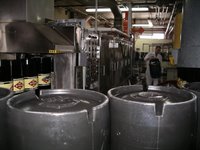 So, what have you learned from the time you just invested in reading this? (If the answer is "nothing" then you have my sincerest apologies! ;-) Hopefully, two things. First, if you somehow are a reader of this site and have never tried Anchor....what are you waiting for?! Second, if you find yourself in San Francisco you must do everything in your power to get to Anchor Brewing for a tour and tasting.
Click Here For All Brew Pub & Beer Bar Reviews
Written by Bryan Kolesar at Saturday, April 15, 2006

Thanks for brining me a poster Bryan ;-)