Which Brew in Easton, PA 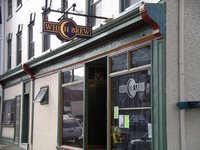 Who, what, where, when, how, why....now you can add which?? Sheesh, now I am confused. Oh wait, yeah, this is about the Which Brew bar and restaurant in Easton, Pennsylvania. Up until this past weekend, I thought the only good things that Easton as a city had going for it was the Crayola Factory for little kids and the Weyerbacher Brewery for big kids. Adam and I went to the Weyerbacher Open House which you learned in a previous posting. He had been through Easton before and discovered Pearly Baker's, which he recommends. From BeerAdvocate.com, I put Which Brew on the list too. The name, though, I will admit had me a bit skeptical. A serious bar with its name doing word play on witches and broomsticks?.....hm, I'm not sure. Those doubts were all quickly put to rest as soon as we walked through the front door...and as soon as our eyes adjusted to the inside's dim light. It was still "touch-and-go", though, as we made our way westward out from the downtown's center square through a somewhat sketchy neighborhood. Ok, back inside now. We were surprised to find practically every seat at the bar (and more than half of the dining room seats) occupied with a late-lunch, early-dinner crowd. Then, we figured this may be the beginning of the spillover from the Weyerbacher Open House revelry and it all made sense. Still, it would be interesting to go back and see what type of business they normally do on a Saturday afternoon. 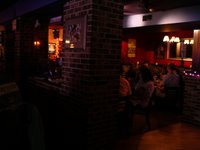 But, who cares right? Because we were there and found two seats against the wall with a nice view of the place. Anne (hope I got the name right) was more than helpful as she came from behind the bar to our table to help us with our beer and food selections. The first thing she was sure to tell us was about the 10 drafts and nicely-stocked bottle list of approximately 40 from around the world. Also well represented was local Weyerbacher, including the supposed last sixtel of the anniversary Decadence available anywhere....like I said, supposedly. You know how these things tend to show up out of the blue :) 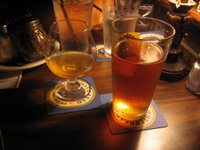 Then she went on to tell us about the food and how every item is made fresh, from scratch. And, how the breads and doughs are homemade by Tombler's Bakery right there in Easton. So, after some very pleasant conversation with Anne, we sent her off with our order for a spent-grain pizza and two beers (the Magic Hat #9 for Adam and the Weyerbacher Prophecy for me). Everything was served very promptly and appropriately and not to mention, delicious. The one thing that will probably strike you the most about the interior of Which Brew is the dim lighting, nice decorating touches, and the heavy use of brick and dark wood. It is surprising to see where they are located, which makes it an even better treat for when you are tucked nicely away inside enjoying some fine food and beverage. Also, just right is the music. While we were there, the genre seemed to be focused on eclectic jazz. It's loud enough to hear, but not too loud as to overwhelm your conversations. The crowd, at least on a Saturday afternoon, appeared to be a crowd of "real people" enjoying their afternoon. And, maybe because of the Open House I mentioned earlier, it seemed to be a crowd of people who knew their Dogfish Head from their Doggie-style Pale Ale. This place definitely has a very comfortable ambiance and, with its excellent list of beers, will make you want to stay twice as long as you were planning. Too bad our time was only long enough for one beer before heading back home for dinner with our neighbors....that was excellent too ;-) p.s. For those of you not familiar with the area, Easton is in Pennsylvania almost 75 miles (125km) west from New York City and 75 miles north from Philadelphia.
Click Here For All Brew Pub & Beer Bar Reviews
Written by Bryan Kolesar at Friday, April 14, 2006

I wouldn't hesitate to go back there next time I'm in the area.