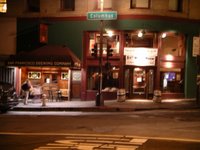 The San Francisco Brewing Company is located in the city's North Beach neighborhood, not far from the iconic Transamerica building and just a bit further from Coit Tower. The North Beach neighborhood has a bit of everything. And it maintains an urban edge to it that helps make it appealing to a wide variety of folks. From Italian restaurants, to shops, to history, and to strip clubs....oh yeah, and a brewpub too. Now the interesting thing about SF Brewing starts with the approach. Being in the glare of the Hustler club made me wonder about where I was really headed. Then, resisting the call of Larry's sirens, I was greeted by a sign that claims SF Brewing to be "Voted the best brewpub in SF." (kind of tough to read in the picture) Wow, if that is the case, I wonder why this place does not get more press? 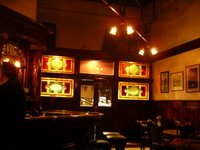 So I wander inside. Not much of a crowd for a Tuesday night...not that I was really expecting much of one. But the few interesting characters at the bar and the quiet couple at a table give me the feeling that this is very much of a local neighborhood bar (perhaps weekends are a different story?). When inside, I was definitely intrigued by the feeling the place gave me. It is an older building with a lot of oak and mahogany woodwork, stained glass and mirrors, charm, and uniqueness that only older establishments can provide. One of the most unique characteristics of the bar is the belt and paddle fan that runs along the ceiling the length of the bar. 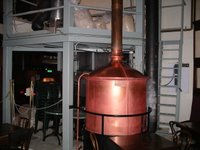 The vibe that I am getting, at first, both from the bartender and other patrons is that "outsiders" are not really welcome. In any case, the beers at least sound interesting. They had just wrapped up some kind of barleywine thing...a festival...I'm not quite sure. I decide to give the Alexander Gunn a try. Not too bad. Finally, Patrick the bartender starts to loosen up when he sees me with my camera, poking around the building, checking things out, and taking a greater-than-average interest in the beer. Patrick starts engaging me in conversation about beer, the brewer, the SF beer scene, and music. 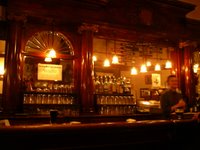 So, with the scene warming up a bit, especially the two lovely ladies next to me who were, in a manner of speaking, with each other (but, I digress ;-), Patrick is now passing me some short pours of the various other beers on tap for me to sample. The IPA, the Anniversary brew (ESB), the porter, and the wheat....in all honesty, I just was not that impressed by any of them. They seemed to lack the oomph and creativity that I had found in many other bars and brewpubs of San Francisco. I had one more barleywine to round out the evening and this was a wise choice, the Oofty Goofty Barleywine packed a nice punch of barley, hops, and alcohol. A nice finish. 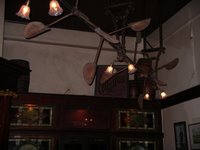 In short, I would say that if you are doing a beer tour of San Francisco, SF Brewing should be on your list. Afterall, it's on your way to or from Rogue Ale House. If anything you should check out the building, its design, and a brew. But, if it should happen to slip from your list due to time, or whatever, eh..you know.....
Click Here For All Brew Pub & Beer Bar Reviews
Written by Bryan Kolesar at Wednesday, April 26, 2006