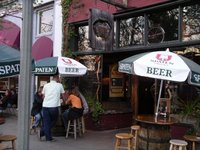 One stop here at the Brick Store Pub outside of Atlanta is all it took for me to proclaim this wonderful beer bar as one of the best places I visited in quite some time. Now, you'll need to understand that this took the perfect storm of events for this to come true. First, a beautiful Tuesday evening in Atlanta in April, a successful day of business meetings, a gathering of good friends at BSP, and a bar that truly outdoes practically everyone else in their industry by serving some of the best beer known to planet Earth. OK, this might be a bit over-the-top, but do yourself a favor and stop by and see if do not agree.

If you are willing to put up with Atlanta traffic, then you can obviously drive to Decatur, 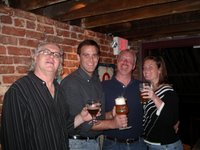 which is 6 miles east of Atlanta. However, if you are already in downtown Atlanta as I was, then just simply hop (a pun!?) on the east-west MARTA train line and 20 minutes later you will be getting off at the Decatur stop just steps from the front door of Brick Store Pub.

Decatur, in what I saw on my brief walk from the train, has all the appearances of being a charming and bustling town with restaurants, shops, and galleries. This seems to be a very livable (and dog-friendly) town that also just so happens to have their own Great Decatur Beer Tasting Festival in October :) Being located on the "town square", which is not a through-street, allows the outside of the pub to be easily accessible but without feeling like the outside world is bearing down on you while you're enjoying your beer. There are a few tables with umbrellas outside. Of course, during the hot and humid months in the South, these are probably not the most sought-after seats! 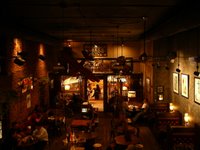 Inside you will find a very comfortable atmosphere. Not only is the first floor bar and dining room seating viewable from a second floor seating area. But, once past the second floor balcony seating (from where the picture to the left was taken), the space opens up to the Belgian bar area and then another tucked room away in the back for eating and drinking. The building is a former feed mill with exposed wood beams, stone, and brick walls. There are no TVs, no smoking, and no attitude (at least not on this Tuesday evening). I'm not quite sure how to explain it any differently to convey just how comfortable I find the BSP ambiance. 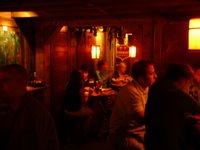 Perhaps the final convincing fact for me that this is a cool place is that it was opened almost nine years ago by three college buddies who wanted to open a great beer bar. How many guys, including myself, would not mind doing something like this?! I got the chance to talk to Mike (the others are Dave and Tom) and really got the feeling that they are in the business for the love of beer and not just pushing a product like I have seen at other establishments. So, it may be hard to believe, but in the almost five hours that I was there I at least sampled each of the beers listed below. As you can see from the notation, there were several that I had never tried before that became instant recommendations.

I agree...the Brick Store is pretty much the best beer bar I've ever been to. I go every chance I get when I'm in Atlanta.

It's to the point where I can call up my main drinking buddy there and just say "do you want to meet for a beer?" and we don't even have to say where.

Ugh, I can't believe I forgot to mention the glassware! Fastidious doesn't even begin to describe how they try to have the right glass (from the brewery if possible) for each beer. Thanks Brian.....we'll be updating our "friends links" soon...but until then, everyone check out http://sudspundit.blogspot.com ...he does a great job of covering what we all can't get enough of....good beer!

I meant to add, in case you don't find it, that Brian did a write-up on Brick Store Pub to, singing their praises, and pointing out their attention to glassware detail :)

I added you to our links Mr. Pundit ;-) Nice site BTW.

Thanks! I've been a bit sporadic on updating lately, but I do try...